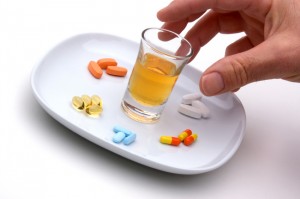 A new Federal report indicates that the majority of fatal overdoses involve multiple substances, instead of just a single culprit:

I thought we knew this. For most of us, it’s Addictions 101. Every counselor learns about the dangers associated with combining certain substances of similar effect.

In fact, it’s widely known on the street. It’s a warning that comes not only from experts but from peers.

Of course, not everybody pays attention to warnings, no matter how authoritative. Besides, ingesting substances at the same time, sometimes referred to in the literature as “combined drug intoxication”, is a time-tested approach to 1) increasing, or 2) improving the quality of sensation or “high” that follows.

You’re familiar with the common practice of injecting heroin and cocaine, known as “speedballing”. The combination allegedly reduces the sedation of heroin use (hard to enjoy the feeling when you’re asleep) and also takes the edge off the irritable, anxious feeling that can accompany cocaine or meth. Then are those who seek to overcome their own elevated addictive tolerance — which interferes with ordinary drug-taking. By consuming a second substance of the same general effect– for instance, another CNS depressant — they tap into synergism. Definition: “An interaction between two or more drugs that causes the total effect of the drugs to be greater than the sum of the individual effects of each drug.”

There’s guesswork involved, and it’s common for people to overshoot the mark. That’s confirmed by how often synergism shows up in autopsy reports. For example, the actor Heath Ledger appears to have died with five different prescription drugs in his system– oxycodone and hydrocodone (Oxycontin, Vicodin), plus diazepam (Valium), alprazolam (Xanax), and temazepam (Restoril). The last three are benzos. Oh, almost forgot: something called doxylamine was present too. It turns out to be an ingredient in some OTC sleep and cough medicines.

The verdict was accidental death. At first that puzzled me, because it sounded like suicide. After all, how could anyone unintentionally consume so many different depressants? But then I realized that the accident may have been in the outcome– a fatality. Ledger’s goal may simply have been to get high again.

We’ve discussed in previous posts the extent to which fentanyl and carfentanil have changed the landscape of drug abuse in America. I’d compare it to the emergence of crack and its impact on cocaine use in 80’s and early 90’s. Seems to me that drug use, even the casual sort if it involves the right substances, has become a lot more dangerous and unpredictable than it was, not so long ago.