What I like about resolve is that it has no sell-by date. Resolve focuses on progress, not perfection. 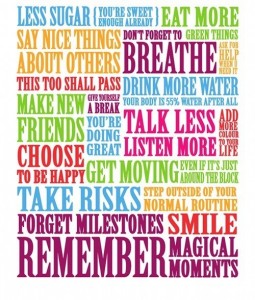 It’s the difference between a noun and a verb. A noun names something: it’s a word that describes the subject or object of a verb. The verb, on the other hand, is a word for a particular action.

I always struggled with resolutions. I made many of them, in hope, optimism, determination, even desperation. As though the act of naming what I wanted to happen would somehow help make it happen. I’d make a resolution to accomplish something: Lose weight, stop a self-destructive behavior, establish a good habit, achieve a goal.

Sometimes I’d write it down. Sometimes I’d tell others, on the “accountability” principle. I was one hundred percent convinced that I wanted to change, that I wanted this particular change in my self or my life. And that the act of “making a resolution” would help me get it.

Except I never seemed to want change enough to actually change my own actions or choices, day after day, week after week, until the change actually took effect. Something always prevented me. Usually someone else—a terrible supervisor at work, or a family member who was deliberately doing things to stress me out, or a sweepstakes drawer who kept willfully not drawing my name from the pile.

After all, how could I possibly get to the gym three times a week when it was always snowing, or sleeting, or below zero outside? Who could ever cut down on alcohol consumption when their job required them to attend galas and business dinners where wine and cocktails were de rigueur? Not fair, yanno?

Oh, I still had the resolutions from January 1st. I carried them around like baggage, getting heavier and heavier, proving with every passing day, week, month, what a miserable failure I was, even though it was everyone else’s fault. Sometime during the year, depending on how insane I was in a given year, I’d eventually get around to replacing them with rationalizations (it was a nice idea, just not really practical for someone in my position,) or denial (never should have made that one, really—totally unnecessary!)

What I like about resolve is that it has no sell-by date. Resolve focuses on progress, not perfection. Resolve is about me, what I do, what I choose—not about “conditions” or what other people do/don’t do.

Resolutions often required elaborate and sometimes expensive investments in preparations or equipment. Hundreds of dollars spent on self-improvement courses, exercise equipment, new clothes, and other ways to “jump start” me into keeping them.

My resolution to ‘get fit’ required me to buy workout suits and a Nordic Track. My resolve to be fit just means choosing the stairs instead of the escalator, a walk instead of a nap, parking farther away rather than right by the door, and a hundred other little things. Some days I manage them all, some days I only manage a few, but the resolve is there, all the same, and I can see it when I do any one of them.

Resolutions come and go, but resolve is a way of life. And when the change of the year rolls around, I can look back and see the gifts resolve has given me, in the rearview mirror: “What it was like, what happened, what it’s like now.”

Cecile, Love this post. You remind me that it’s the little things I do everyday that make the difference. It’s the little ordinary tasks I choose, or refuse to choose, that create the quality of my life. It’s that little ordinary choice to walk the stairs, eat the salad, get to bed early, tell someone I love them. Those are the things that make life extraordinary because I am resolved to being different than I was yesterday.

You are a beacon in my recovery. So. I will start the year with telling you that you matter in my life. Thanks for all the support in 2014. I am looking forward to an excellent and extraordinary 2015.
NYE, hearts, Lisa