Can I Help My Boyfriend Stop Drinking?

Once someone with alcoholism acknowledges the need for professional help, even insincerely, the biggest obstacle is gone. 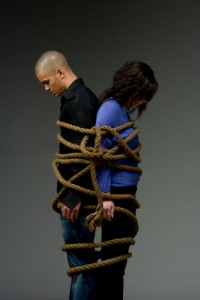 My boyfriend has always been a drinker, and it’s just gotten worse as we got older. He’s never had any treatment, however. Whenever we discussed it, he would just insist he didn’t have a problem and I was crazy to think so. Two years ago we moved 400 miles so he could start a new job. That job didn’t work out and he was drinking pretty heavily. Some months back I started forcing the issue. At first he denied it the way he always did, but then seemed to loosen up a bit and we actually talked about it for the first time. Even started talking about a program for him. Then he started putting me off again and making excuses for not doing anything. We’ve been stuck for a while now. I’m so frustrated with him, I could just throw his butt out of the apartment and change the locks. Give up and go back home by myself.”

Gosh, I wouldn’t. Sounds like you’ve made a whole lot of progress in this extended negotiation you’ve been having. You know what tips me off? He’s arguing about the logistics – the who, what, when and where of getting treatment – rather than the why. Once someone with alcoholism acknowledges the need for professional help, even insincerely, the biggest obstacle is gone. Overcome that one, as you apparently have, and you’re closer to the end zone.

It helps to remember that treatment is scary for an alcoholic person. He won’t see things the way you do. In his mind, this isn’t an opportunity to get well; it’s a risk and a sacrifice. He’s probably wondering if (without alcohol) he can ever be happy again. Or relax, or have a good time with his buddies, or just kick back on a hot day. He may suspect that even if he quits drinking, you’ll decide you don’t love him anyway. Such fears don’t make a lot of sense to the rest of us, but to an alcoholic considering help for the first time, they’re a big deal.

So you’re doing something right, because he seems to be hearing you. Still, the closer he gets to an actual decision, the more he’ll be tempted to stall. It’s pretty much how this works. You can keep chipping away, as you have been with considerable success. Or if you’re as frustrated as you sound, you might just give him the choice. Go to treatment now, with your full support (don’t forget that part), or you’re ending it. That way at least you’ll get an outcome, whatever it might be.

Video: Can I Help an Alcoholic Change?

In my opinion, the best thing you can do to help your boyfriend is to help yourself. For me, that means joining an Al-Anon group where you can learn all about alcoholism and how to better respond to alcoholics. I have attended several groups and the best one for me is the one that sticks to the program without trying to moralize others.
The most important lessons I have learned in this groups is that I can’t control someone’s drinking, I can’t change it and it is not my fault. That has been very liberating and has allowed me to focus on what I want and need instead of always trying to “fix” him.
Good luck!

I personally am not a fan of the ultimatum unless you really mean it. If he calls your bluff and you give in that sets a bad precedence. In this case it sounds like it may be appropriate.