Seek outside advice. Good advice, that is. Not the sort from the guy on the next bar stool. 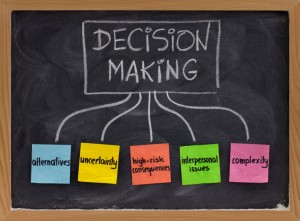 We’ve all had the same thought when we hear about somebody famous who makes a ridiculously bad decision — what were they thinking?

Take the football star who brought a loaded gun to a nightclub and wound up shooting himself in the leg. Or the actress who shoplifted $5000 worth of clothes from Saks Fifth Avenue.

So little to gain, so much to lose. The actress could easily afford that dress. The football star could no doubt have hired a bodyguard.

Why didn’t they? It’s a mystery.

Research provides a few explanations as to why smart people make dumb decisions:

We tend to stick to old patterns of behavior: If we get away with something once or twice, we believe we’ll get away with it again. Take DWI. Typical arrestee has driven under the influence many times for each arrest. Eventually his luck runs out.

We rely on feelings rather than reason: Particularly negative emotions. We dwell on a resentment and that short-circuits our reasoning. We wind up doing something foolish to show somebody up. And regret it later.

Peer pressure: Ever noticed how many athletes surround themselves with friends from the old neighborhood? That’s loyalty. But those friends may not be the best influence.

Selective forgetting: We do tend to forget the lessons of experience. Painful memories fade with time.

How to make a better decision