Nine months ago I was rummaging through your garbage for 5¢ cans. Today I am an author. 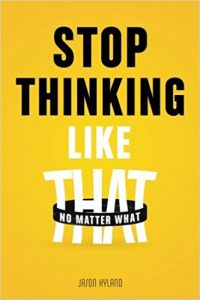 Hopeless? Lost? Feel like giving up on life? I did, too, less than a year ago, with my life fully consumed by my addiction to drugs and alcohol. Then, I finally surrendered to those addictions & asked for help. Since that day– July 24, 2017– my life has been blessed with an abundance of opportunities which brought me on the journey described in “Stop Thinking Like That”. I am living proof that anything is possible, no matter where you are today. It is time to conceive, believe, and achieve.

What began as something to occupy my time while stuck sharing a room suited for three with five people, soon became my therapy. It was my escape from the realities of the situation I had put myself in. I would get lost for hours as my pen flew and pages were filled with an endless amount of value. Value from the harsh lessons of a life stuck in addiction. Tears would fall, but my pen continued on. From the detox unit I moved into a rehab house with eighteen other men. That’s where I finished writing “Stop Thinking Like That”.

I wrote my book while living in a rehab facility with 18 other addicts, with no access to a car, cell phone, or computer. Rules are rules. I rode my bike or walked throughout the cold New England winter to the town library to transfer every sentence written into a Word document. Every day– rain, snow, or shine– I would take advantage of the 2 hours we were allowed to leave the house to do it. Conceive. Believe. Achieve.

“Stop Thinking Like That” was originally my way of helping myself heal during the tough, lonely early stages of recovery. But soon I felt a sensation from within telling me to continue on no matter what. That feeling told me to write as much as possible, every day, to show others that they, too, can go after whatever it is they want. We can pursue and achieve happiness. We can live beyond the dark pasts that have been restricting us from internal growth. Our addictions do not have to control our lives any longer.

Anything is possible. Trust me. Nine months ago I was rummaging through your garbage for 5¢ cans. Today I am an author who gets to share the message of hope and inspiration, blessed beyond belief. Conceive it. Believe it. And you WILL achieve it.

Jason Hyland says “I was on the fast track of achieving my dream of playing MLB when my addictions began to take away all that I had worked so hard for.” Today he is a grateful alcoholic, addict, son, brother, uncle, grandson, friend, and father to two dogs and travels all over New England for speaking engagements to help others. You can find more information about his book and journey at www.jason-hyland.com or on any of his social media accounts: @jasonrhyland.