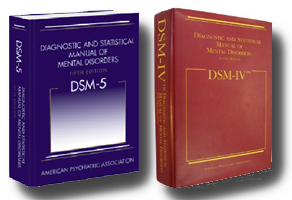 DSM-5 has been out for months now, although I’m surprised to find many folks still aren’t using it. A recent visit to a program in a nearby state revealed that payers– the folks whose opinion matters most, I suppose– still demand evidence framed in terms of DSM-IV criteria. Not sure why that is, other than simple inertia. The rest of the field seems to be moving on.

The most obvious change from version IV (other than dumping the Roman numerals,) involves elimination of the ‘abuse’ and ‘dependence’ categories. DSM-IV had intended the two terms to separate the lesser problem users from the seriously addicted. Version 5 substitutes ‘substance use disorders’ for abuse and dependence and adds a simple severity measure based on the number of symptoms: 2-3 means mild, 4-5 is moderate, and 6 and above, severe. Critics counter that this will lead to overdiagnosis of addictions, and to unnecessary stigmatization of minor problem users.

Another big difference: Craving has finally been added to the symptom list. I was never entirely clear on why it wasn’t included in DSM-IV, since there’s an impressive body of research on craving measurement. It’s questionable whether someone experiencing craving is actually more likely to lapse back into use– people learn to resist cravings, after all– but it seems like an important diagnostic indicator. It’s certainly common to all addictions.

The solons at DSM also decided to eliminate legal problems– a staple of version IV– from the symptom list in DSM-5. Their rationale is that because of variations in culture, it was too difficult to apply the criteria internationally. I’m not sure I understand that, either, particularly given the research that suggests a pattern of 60 to 200 episodes per DWI/DUI arrest. I ran into one fellow a few months ago with 15 DWIs on his record. That translates to potentially 3,000 separate incidents. Sounds like pathology to me.

Each separate substance use disorder now gets its own heading, rather than being lumped together under the heading ‘polysubstance’. This should present some challenges given the number of addicts who mix and match drugs. Read the autopsy report on actor Philip Seymour Hoffman– it’s like going through a DEA list of controlled substances.

A side by side comparison of IV and 5

Research on how to measure alcohol craving

The manual grows and they define things differently to make more and more diagnosis possible. Symptoms remain about the same they are just calling it different to get health providers to pay for something new. The Pharma has the drugs on the shelf they just need new diagnostic terms to apply them to.

When you live in a country that spends more on health care the last two years of a person’s life than any other time…what is the motives of the industry that is supposed to care? These manuals…once something to hang a hat on, have become an invitation for the marginal to substandard professional to add yet another bogus claim to their credentials.