From a seller’s viewpoint, no customer is more desirable than someone who is actually dependent on their product. 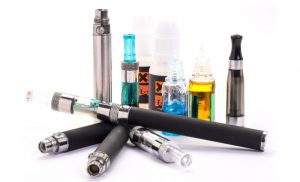 Vaping is an example of what can happen when technology designed for a legitimate medical purpose finds its way into the larger population — in this instance, kids.

The whole point of electronic cigarettes was to provide another alternative to smoking for those who were unable to give it up by other means. The e-cigarette would serve as a substitute method for ingesting nicotine, but without the health hazards associated with tobacco. Think of it as a harm reduction measure. I know several longtime smokers who made the switch and seem satisfied, and several others who tried and failed.

Right from the start, however, e-cigarettes drew intense interest from adolescents. Warned against smoking from an early age, this was a way to have their cake and eat it, too. Historically, most smokers begin using tobacco in early adolescence, a time of life when it’s easier to minimize all sorts of risks.  Some kids simply assume they won’t become addicted. Others figure that even if they do, they can always quit later.

These are common misconceptions — some might call them delusions — among new users of any potentially hazardous substance. Eventually most recognize the flaws in this reasoning, but by that time, it’s too late for an easy escape.

From the business perspective, a seller’s most desirable customer is someone who genuinely needs to use your product, indefinitely. Not only wants it, but flat-out has to have it. That’s a terrific source of revenue. Smart marketers were quick to exploit the fast-growing youth market for e-cigarettes, through cute devices like the JUUL, and kid-friendly flavored nicotine with teenybopper names like Peppermint, Candy Crash, Blue Razz, and Lemon Tart. It sure seems to have worked. The absence of regulation helped. Adolescent use exploded, and here we are.

By now, this segment is absolutely key to the industry’s revenue base. With American cigarette consumption in decline, the industry is searching for opportunities to make up for lost profits. One just happens to involve heavy promotion of electronic nicotine delivery devices.

Experts have described the manufactured cigarette as “a crack pipe for nicotine.” The vape pen is in the same category. It’s designed to get the drug to the brain as quick and efficiently as possible, and to foster dependence in the user.

Of course, kids who do vape are at some risk to move on to smoking at some future point. Promoters of vaping are anxious to publicize research to contradict this, but to anybody who is familiar with addiction, that’s hard to believe. If you’re already physically and psychologically dependent on a drug, the main goal is always to get it to the brain as efficiently as you can. It’s no longer about enjoyment. So what difference does it make in what form it arrives, so long as your brain is temporarily satisfied? Why not use whatever happens to be at hand? After all, it’s just one cigarette…

I should mention that the city of San Francisco is preparing to vote on a ban of flavored nicotine products that seem to attract kids. It won’t be easy, politically speaking. According to the Washington Post, “R.J. Reynolds Tobacco Co., which makes vape products as well as Newports, has contributed nearly $12 million to the “No on Proposition E” campaign, filling television and radio airwaves and mailboxes with ads urging voters to reject a law supervisors approved last year that is now on the June 5 ballot.”

Twelve million dollars is a whole lot more than proponents of the bill can spend. I predict a flood of TV and online ads claiming that the right to vape is a “freedom” issue for all patriotic Americans.

In reality, most nicotine addicts are anything but free. Once you’re “on” the stuff, so to speak, it’s really difficult to get off. Here’s NIDA to explain why.

So we find ourselves in the midst of yet another battle between public health advocates and a business community looking to maintain its profit margin.Not the first time, and I’m confident it won’t be the last.