What we really need most are substantive changes on the demand side. 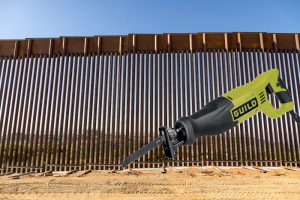 You may have heard that this year’s White House Halloween celebration featured a special “wall-building” game for the kiddies. This did not go over well with critics, especially a life-size (if slimmed-down) version of what appeared to be the President in a hard hat, recruiting junior volunteers to help with construction.

Meanwhile, we learned that the allegedly impregnable border wall, actually a 30′ fence, had already been breached on a number of occasions, including by smugglers using a power tool from a neighborhood home improvement store. The fence’s builders rushed to defend the project — understandable in view of the expense and political capital already invested — while opponents stood by and made fun of them.

Here are the details:

Trump said the new border wall was “impenetrable.” Smugglers are sawing through it.

Truth is, I’ve never been one who thought a wall would do much to stop the flow of drugs. It might slow traffic for a while, but eventually the plan would succumb to two inherent flaws. Those are:

We went through this during the Cocaine Epidemic, when we realized that even if somehow the borders could be sealed, there was nothing to stop outlaw methamphetamine producers from meeting the demand through increased distribution of their products– a la Walter White in Breaking Bad.

The same could happen with fentanyl. There’s so much money involved, the profits are so great, that we have to believe that crime would find a way. They always have.

It’s a game, really. Early on, the good guys make exciting gains, predict greater success to come. But as time passes, the bad guys make a comeback, and the drugs begin to flow freely. It usually takes a while for the forces of law to recognize this.  When they do, they  rush to respond. But this time, success is elusive, early gains more difficult to achieve…

And so on and forth. We don’t see many permanent victories. Just the temporary sort.

The market for fentanyl already exists. The drug itself is so potent that only tiny amounts are required to create product where the Return on Investment is immense. You can imagine how this turns out.

I’m not the first to observe that this deep into an epidemic, what we really need is substantial progress on the demand side.

Where will that come from? Certainly not from a wall, no matter how impressive it may look on camera.