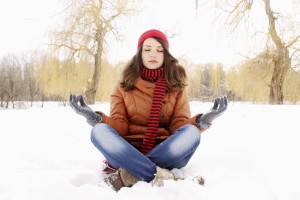 This NYT article is about research on the brain’s ability to calm itself when under stress.

Most of what I know about calm I learned from roller coasters. I grew up in the Midwest, where bigly yuge coasters are a staple of amusement parks and State Fairs. It’s technically optional but you can’t make it through elementary school and junior high without encountering roller coasters. Your peers will insist. My problem: Roller coasters made me nauseous. Worse yet, on some occasions, I’d actually pass out.

After many experiments, I finally figured it out. I was forgetting to breathe.

It took a while to recognize that because periodically, I’d find myself gulping air in short panicky gasps that made a lot of noise. Unfortunately this failed to adequately flush my lungs between breaths. Toxic gas accumulated. And it was making me sick.

The secret was to practice a more rhythmic breathing pattern centered in the diaphragm. Three counts in, six to nine counts out. You have to discipline yourself to that while hurtling down a rickety incline in an oversized toy car with a bunch of screaming teenagers. But it can be done. And it does work.

Guess what? Roller coasters are fun.

All I’d really discovered was the importance of breathing to preserve calm and mental clarity when under stress. Years later, in psychology class, I found out I’d done exactly the correct thing. According to science, I even made better decisions after taking a few moments to calm myself. That left me better prepared to extricate myself from whatever ridiculous situation I was in.

The article focuses on research done on mice. Granted, they’re not people. But they are fearful fellows, prone to panic and flight. The physiological mechanisms are close enough to draw some helpful conclusions.

The good news: deep breathing “does not activate the neurons that communicate with the brain’s arousal center”, and therefore does not trigger agitation or panic.

Instead, it seems to promote a feeling of calm.

Something we can all use from time to time, no?