An important step that programs often skip: the collection of baseline data. Improvements are often incremental, and if you don’t know exactly where you started, it’s easy to miss them. 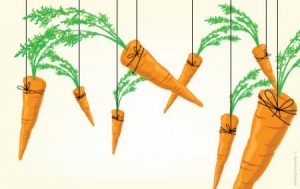 Nothing prevents a treatment provider from rewarding clients for attending sessions or complying with other program requirements. That’s another way to promote compliance.

The idea is borrowed from social psychology. When someone does something desirable, reward it– promptly. The reward need not be large, but it should be something the recipient appreciates, and provided in response to a targeted behavior.

Incentives permeate modern life. For instance, those prizes given out by banks to new customers. One bank exec explained that their real goal was to make home and auto loans and issue credit cards to young two-career families. The no-fee checking or savings accounts actually produced no revenue of their own, but attracted newcomers who could then be introduced to loan and card offers. The prize worked best if it interested young homemakers– a microwave or a coffeemaker. “Make sure you never run out of prizes,” he warned, pointing to a closet filled to the brim with kitchen equipment.

In another context, researchers in medicine and the social sciences routinely pay subjects to participate.  Something as simple as a $5 or $10 gift card is usually enough to entice a subject to an interview, while much larger dollar amounts may be required to subsidize longer-term involvement in medical studies.

In addiction treatment, organized incentive programs were first used during the cocaine epidemic. Coke and crack users had unusually high dropout rates in outpatient settings. One early solution featured a weekly prize drawing involving a fishbowl full of slips with client names. Clients had to attend a certain number of sessions without a miss to earn additional slips and therefore more chances to win. The results were promising in terms of increased attendance and retention — even reduced drug use.

If you’re interested in how such programs work, the folks at NIATx provided this helpful downloadable toolkit.

I’ve heard philosophical objections. “I feel like we’re paying somebody to come to treatment. They’re supposed to pay us, not the other way round.” And other clinicians worry that it encourages vulnerable individuals to gamble.

You do need to be careful not to accidentally incentivize the wrong behavior. One program set out to increase the average number of consecutive negative drug tests for a client —  performance measure that would earn the program a contract bonus. To their dismay, they discovered the renewed emphasis on clean urines motivated clients to cheat.

An important step that programs often skip: the collection of baseline data to establish targets. Improvements are often incremental, and if you don’t know exactly where you started, it’s easy to miss them. You might conclude that incentives aren’t working, when in fact they are.

If the idea interests you, then a well-designed incentive program can be a way of improving outcomes with voluntary clients. And there’s no law against adding incentives to a mandated program.