I ask myself if this Board, as presently constituted, is capable of taking the organization to that level of success. 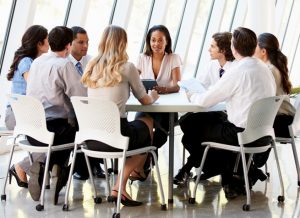 I don’t know how many of you work for a company with a Board of Directors. Nonprofits tend to have boards that are more diverse and representative of their communities, while for-profit boards are likely to be composed of investors. There’s a substantial literature on the subject of how boards operate, and no shortage of expert opinions like this.

A Board of Directors is at heart a political body, and like any of its type, can become dysfunctional. It may divide into opposing factions, or become passive, a mere rubber stamp for management (known as a ‘woodpile’ board — logs, get it?). All dysfunctional boards, in my opinion, have one trait in common: a stubborn inability to see themselves as the problem.

Instead, a dysfunctional board will focus blame elsewhere. Market conditions, for instance, or government restrictions, or most conveniently, its own CEO. Anything but themselves, which is too bad, because that’s where change needs to occur.

I think of it as collective denial, or to steal a term from neurology, anosognosia— a deficit of self-awareness.

Some common signs of Board dysfunction:

A lack of new blood. I recall one board (nonprofit) where no member had served for less than a decade, and a few had served nearly 30 years. Not surprisingly, the organization was badly out of date.

Too much turnover. This is also a sign of dysfunction, if it’s based on defections rather than something planned like term limits.

Too much politicking. Members are focused on gaining influence or control. Internal struggles take precedence over the organization’s best interests.

The wrong mix. It’s often said that a strong Board is composed of “know, dough, and show”. That’s expertise (the know), the ability to raise money ( the dough), and a modicum of prestige (the show). It’s not good to have a board overloaded in one area while decidedly short in others.

I’ve been involved with several boards that I would personally describe as dysfunctional. In self-defense, I’ve learned to apply a simple test. I visualize what the organization or business could become when its potential is fully realized. Then I ask myself if I believe that this Board, as presently constituted, is capable of taking the organization to that level of success.

If the answer is ‘no’– which it occasionally is — I ask myself: “what the heck am I doing here?”

Being on a Board is a commitment, and not one to be taken lightly. But if a Board is mired in dysfunction, unable or unwilling to acknowledge the need to change, then it’s a good idea to look around for a gracious exit.

There are plenty of better uses for our precious time.