In his review of long-term outcome studies involving both alcohol and heroin users, Vaillant noted the inspirational aspects of such participation. 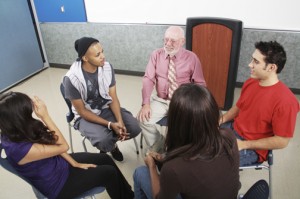 Another approach to building treatment compliance involves some type of community support, usually through one of the recovery fellowships, or a church group, or a professionally-sponsored peer counseling program of the type that has emerged in recent  years. There’s persuasive research that suggests better long-term outcomes may be had with participation. (For example: “Helping Others” research project at Case Western Reserve University.)

The benefits appear to be derived from giving support as well as receiving it. Peer counselors usually complete a training and then volunteer to work with clients, either in small groups or one on one. Twelve Step members can progress to a point where they sponsor others, usually newcomers. The underlying principles are similar. The goal shouldn’t be to replace professional treatment, but to increase the opportunity for lasting recovery.

At one program, I was able to sit in while an accreditation surveyor interviewed three graduates who were doing well. All three credited strong new friendships they’d been able to make since leaving the program. One found them within the center’s alumni association. Another became active in his NA home group. The third helped found a women’s meeting at the local mental health center. I had the sense of different paths to the same outcome.

In his review of long-term outcome studies involving both alcohol and heroin users, Vaillant noted the inspirational aspects of such participation. These groups, organized or not, provided ready examples of success for newcomers to model. Perhaps that helps when internal motivation is weak — a common occurrence in early recovery. To borrow from 12 Step lingo, it’s not just the experience that helps — it’s the strength and hope that goes with it.

Still, if a newcomer doesn’t feel accepted, they’re likely to drop out. This will probably be blamed on the support group. “Those people don’t like me,” someone will report, although it’s more likely to have been the other way round. “It’s too cliquish”, runs another common complaint. The experience of belonging is subjective. Difficult to pin down, and probably best not to try.

And of course, some people never get involved at all. Still, it does seem to have a positive effect on those who do. That’s worth paying attention to.

I’ve been impressed by the role that 12 Step clubs and drop-in centers play in some communities. They appear to fill important gaps in people’s lives. A place to go when support is needed, or just for the company of others.

Once again, the goal is better compliance, so why not make use of something within the community that facilitates that?

Good stuff, Scott. This post reminded me a bit of how Weightwatchers might be helpful to some with overeating/obesity issues. Keep up the great work!