I’m no lawyer, but it makes me think of robbing a bank and returning 20% of the spoils to avoid jail. 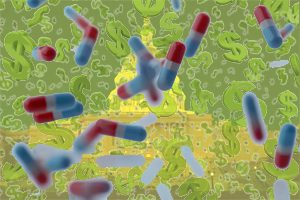 So now we’re beginning to celebrate recent successes in Court, versus adversaries like Purdue Pharma,  the Sackler family, and even mighty Johnson & Johnson, “the world’s largest independent biotech company by market cap,” according to a blurb. I’m not one to downplay the importance of such successes. As addictionologist Andrew Kolodny says in the article, it’s “the first time a court has ruled that opioid manufacturers are responsible for an epidemic of addiction and overdose deaths.”

Yes, that’s a big deal. Both in terms of legal precedent and public perception. Still, there have been a number of valid criticisms along the way. For instance:

Although Purdue Pharma will presumably bankrupt and fall under control of a trust run by the government plaintiffs, the Sacklers themselves will no doubt escape much in the way of punishment. Sure, it will cost billions, but they’ll remain  enormously wealthy. We’re told they’ve already squirreled away a cool billion in offshore accounts.

If much of that wealth resulted from deceiving physicians about the safety and effectiveness of Oxycontin and its mates, shouldn’t they do time? I’m no lawyer, but it makes me think of robbing a bank and then offering to return 20% of the spoils in return for no jail time.

I suppose that actually happens on occasion.

A few other complaints that have been mentioned:

Some of the proposed settlements do appear to include substantial monies for treatment and prevention. That’s good, because otherwise taxpayers will get stuck with the bill. It won’t be enough to make up for the entire expense. It never is. You’re still on the hook, Oklahoma.

Then there’s the issue of attorneys’ fees. Earlier discussions mentioned a figure of $60 mil. Couldn’t at least some of those fees be paid in Oxy? We should have plenty on hand.

I don’t mean to joke about serious matters, but there’s something about lawsuits and settlements that just feels absurd to the rest of us, who do our level best to avoid them altogether.

I’m sure the story isn’t finished. Not for a while, yet.