“The Wire” and Children of Addiction

The first time around, I thought it was the best-ever depiction of the impact of addiction on all levels of society– individuals, groups, institutions. 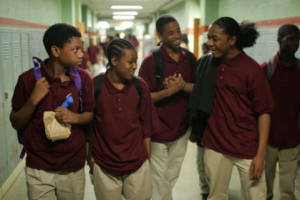 The NY Times did an article about the impact of the heroin epidemic on children of addicts.

I saw it as a rerun of the early years of the crack epidemic. That one migrated from South America, whereas the current model is home-grown, mostly the result of some remarkably misguided policies within our own healthcare system. The dynamics and the effects on society are quite similar.

Many street heroin users are as challenged by the demands of parenting as crack users were, so extended families often have to step in– if the child is lucky enough to have them.

I’m thinking it’s time to sit down and watch The Wire again. I’ve seen it once. The first time around, I thought it was the best-ever depiction of the impact of addiction on all levels of society– individuals, groups, institutions. Oddly enough, given the subject matter, I found it hopeful. There’s no real promise of an end to the cycle, but there’s heroism in the attempt– a bit like Schindler’s List.

For those who haven’t seen it, The Wire takes place in Baltimore, a city with a virtually permanent heroin problem, and is about the struggle for control on multiple levels. The first season focuses on a small group of officers, mostly rejects from other squads (for not following directions), brought together to run a wiretapping operation. The second season switches focus to an attempt by the leader of a struggling longshoreman’s local to save his union by allowing smuggling. The third season focuses on one police major’s attempt to confine street sellers to a tiny area of town he calls “Hamsterdam”. That does not end well. In Season Four, the scene shifts to the disrupted lives of a group of middle-schoolers struggling to grow up in a toxic environment. The fifth season is mostly about the gradual corruption of the media. Since the author, David Simon, was a veteran crime reporter for the Baltimore Sun, this is a real insider’s view.

For me it was one of those viewing experiences where I find myself thinking “I know that guy!” or “Oh man, I remember when that happened”. I still haven’t seen anything on TV or in the movies that more accurately portrayed the reality of a drug culture. There’ve been explorations on a smaller scale, like Simon’s own The Corner or the film Drugstore Cowboy, but this is the best.

Worth a look, IMO. My guess: Some things will seem familiar. And I’m wondering when some adventurous producer will attempt something comparable about the current opiate epidemic.