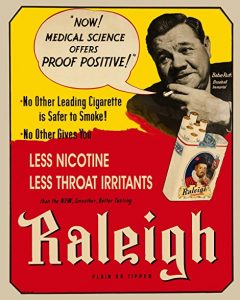 Here’s a link to a nice summary of a “craze that should never have happened.”

This vape craze should never have been allowed to happen

I have to agree. Our current problems, particularly among youth, are entirely of our own making.

Nevertheless, as drug problems go, our experience with vaping is far from unique. In many ways it replicates its predecessors– prescription painkillers, cigarette smoking, alcoholic beverages – in the sense of legal substances that were heavily promoted by corporate interests for their own financial  gain. Their tool of choice: advertising and promotion. And yes, it now appears they not only realized early on that they could be harming their customers, they seem to have accepted that. Perhaps even reveled in it.

Take cigarette smoking. Early ads featured sports heroes such as Johnny Weismuller, Olympic swim champion who went on to play Tarzan in the movies. He was paid to pretend that smoking actually improved his athletic performance.  Physicians (and actors playing physicians) were featured regularly in print ads for brands that claimed to be less irritating to the throat (I seriously doubt there was any scientific evidence behind that).

The whole notion of medical professionals advocating smoking seems preposterous today, but it wasn’t then. White coats and stethoscopes were prominent in those early promos.

Just the other day I happened across a full-length TV spot for a buprenorphine medication promoted as a treatment for opioid addiction. I did not hear any mention in the voiceover of the fact that the medication itself is an opioid. I’m sure there’s a ready-made rationale behind that, but on the other hand — hey guys, that’s an opioid. It has an abuse potential.

If experience holds, this drug will find its way onto the black market at some point. After all, there’s  already a thriving demand for bupe in correctional institutions.  More profitable than heroin itself, I’m told.

Where there are buyers , there will be sellers. Be cautious with any opioid, even ones you consider safe. Perhaps especially those.

I shouldn’t have to say that, should I? Not at this late date.

But apparently I do.