I think at this point, most law enforcement personnel would agree. They’ve concluded that, as the saying goes, this is one of those problems we “can’t arrest our way out of.” 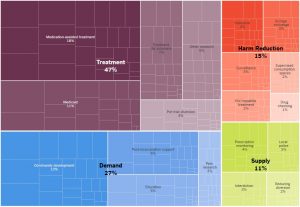 “The business of government,” explained a well-known political consultant, “is dividing up the pie.” Referring to the budget, of course. Apparently it makes little difference whether the budget in question is on the scale of a nation, state, city, town, or village– politics are always involved.

There was an interesting thought exercise in a recent issue of the New York Times. Thirty experts from areas such as treatment, law enforcement, healthcare and government were asked what they would do to combat the opioid epidemic if they were given $100 billion to spend. Sounds like a lot, and it is– the current White House proposal is for $6 billion, and most observers expect that to be reduced  — but still less than what we spend on HIV/AIDS. So not completely unrealistic, from a national perspective.

“How a Police Chief, a Governor and a Sociologist Would Spend $100 Billion to Solve the Opioid Crisis”

In general, a few things stood out when a consensus of opinion formed:

By the way, none of the experts seemed to think it would do much good to build a gigantic wall between the U.S. and Mexico. Surprised?

The expert from our own state, which has long been plagued by opioids, focused on the needs of the chronic user: Medication-assisted treatment, needle exchange, naloxone, etc. That makes sense. In an environment like this, the emphasis has to be on preventing fatalities, especially as fentanyl becomes a dominant factor.

Other states focused more on reducing demand, usually through social programs — community support and resilience — along with prescription drug monitoring and preventing the diversion of prescription opioids.

Some readers might be surprised that more money for local police wasn’t seen as a big need. But I think at this point, many local law enforcement personnel would agree. They’ve already concluded that this is one of those problems we can’t arrest our way free of.

Just for fun, how would you allocate a fantastical $100 billion, if it were your call? And why?