In the News: Spit in the Ocean

But it quickly becomes clear that the powers that be within the land are far more interested in fighting and squabbling among themselves over political power and riches, than in addressing this existential horror. 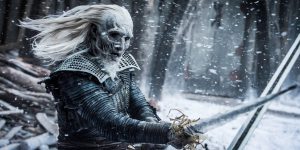 Governor Kasich of Ohio– a state hard-hit by the opioid epidemic– showed up on television recently to complain that his own party’s proposed $45 billion in funding to combat opioid abuse was like “spitting in the ocean“.

On first hearing, $45 billion may sound like more than enough. Kasich’s point is that however good it sounds, it won’t measure up when it comes to the challenges ahead.

For one thing, the money’s spread over a 10 year period, to be applied to the nation as a whole. Second, most of it could wind up somewhere other than prevention and treatment– law enforcement, for example. In fact, if Medicaid is reduced as promised, access to addiction treatment will be substantially reduced.

And any funding package that extends so far into the future is vulnerable to later reductions– due to an economic downturn, for example, or world events, or changes in the political environment.

So while it may not exactly qualify as ‘spitting in the ocean’, there’s a strong possibility that $45 billion will prove inadequate. And not just for Ohio, but for many states where the epidemic is still expanding.

As an aside: Any Game of Thrones fans out there? I haven’t kept up with the TV version, but I’ve read the books. Besides, the author lives here in town and it’s difficult to avoid running into him from time to time (hint: if you do, try not to beg for info about when the next book is coming out).

Anyway, the plot is framed in the prologue to the very first of the books. That’s when the reader is introduced to the creatures now called the “White Walkers”, monstrous figures from the North who represent the end of society, and death for all they meet. Scary indeed. But it quickly becomes clear that the powers that be are far more interested in fighting and squabbling among themselves than in coming together to face this existential horror.

I don’t know if George RR Martin meant this as a metaphor, but we could sub a number of different modern dangers for his monsters from the north. I’d have to include the opioid epidemic among them.

And like Governor Kasich, I have to wonder if our leaders fully appreciate the enormity of the threat.