In the News: Medical Cannabis in PA

As has been the case in many states that have gone this route, it was the impassioned pleas of patients and family members that played a deciding role. 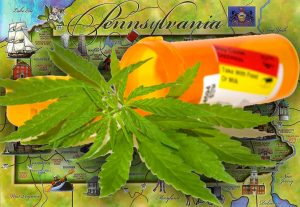 The Commonwealth of Pennsylvania recently became the 24th state to approve a medical marijuana program. It appears to have garnered quite a bit of bipartisan support, rare in the current political climate. Here’s a description from the Pittsburgh Post-Gazette.

As has been the case in many states that have gone this route, the impassioned pleas of patients and family members played a deciding role. The Pennsylvania bill approves the use of cannabis for a range of conditions, in the form of oils, pills, ointments, and gels. Smoking marijuana is still prohibited.  You’ll need a doctor’s prescription to access it, although that won’t be overly difficult to obtain– if you don’t suffer from a listed condition, you can be prescribed medical marijuana for “severe pain that resists traditional pain management.”

The bill allows use in the treatment of children, as well. One mother described the challenge of managing her autistic 7-year old, and her conviction that cannabis was the answer. He’s been screaming almost continually and assaulting her on a weekly basis, so we can only hope it works.

To that end, is it likely to work? The research seems far less conclusive than the testimonials. Here’s a critical discussion in four installments by the physicians over at the Science-Based Medicine website. It’s an in-depth look at the multiple issues surrounding the use of cannabis as a medical treatment. The first part (July 2014) is an overview of the research on various common disorders, including chronic pain; the second (Aug 2014) and third (March 2015) look critically at issues around its use in cancer treatment; and the fourth and final installment examines cannabis as a treatment for autism. It’s a lot to read but the authors are good writers as well as experts, so it’s worth the effort:

Medical marijuana as the new herbalism, part 1: Science versus the politics of weed in New York and beyond

Medical marijuana as the new herbalism, part 2: Cannabis does not cure cancer

Medical marijuana as the new herbalism, part 4: Cannabis for autism

One of the authors noted that it might make more sense to legalize cannabis for widespread recreational use than to restrict it to medical uses, where it appears to be less than effective. After all, many medical marijuana patients I’ve met have already been regular users for years– just not legally.

Maybe we should decide to treat pot the way we do alcohol and tobacco– as a drug we accept not because it’s particularly useful or entirely safe, but because people want to use it. And hope that the healthcare professions figure out a way to minimize any adverse consequences.