What’s likely to provide you with the best recovery guidance? There’s your ‘recovery guide’- maybe a better description for nonbelievers than “higher power.”

Let’s start by defining a “Recovery Tool.” The biggest, loosest definition is ‘anything that helps the addict/alcoholic a) maintain sobriety and b) continue recovery.’

By that definition, there’s a very wide array of tools available: Everything from medication to meditation. But during the early stages of recovery, tools specifically focused on helping you maintain sobriety are likely to be the most useful, because that’s the major challenge of early recovery: Staying sober long enough to overcome the physiological effects of addiction and allow the brain to return to a ‘normal’ that isn’t defined by constant access to drugs/alcohol.

So far, the most effective tool in this category, based on the experience of millions of recovering individuals, is a step-based and group-supported system. Although some nonbelievers have rejected this system, and many have achieved recovery and long-term sobriety using SMART Recovery, LifeRing, and other tools, many more atheists and agnostics have recovered within the ranks of AA/NA. We recommend it as a starting place because:

That’s where most of the sobriety is. Being able to share the experience of others who’ve achieved long-term success is a powerful support for maintaining sobriety. We’ve known NA members and SMART Recovery members who add AA to their “meeting schedule” because it offers a larger pool of members with 3 or more years’ sobriety: potential sponsors and mentors.

12-Step fellowships are traditionally tolerant of differing beliefs. That’s not to say that all members are tolerant- we’ve been to meetings that were completely derailed by a need to convince a nonbeliever how wrong their nonbelief is. But we’ve also been to plenty where nonbelievers appeared to dominate- no Lord’s Prayer and a very secular interpretation of the steps. And our nonbelieving clients mostly have done well, even as a minority in 12-Step meetings largely attended by religious folk.

12-Step groups usually adapt to include changes in their own membership. Step fellowships have survived where other, better-organized, more-structured efforts have failed, because they adapt to changes in their membership. Gay and lesbian alcoholics recovered in AA for decades, eventually forming their own meetings. Spanish-speaking meetings have grown where Spanish speakers need help. Spinoffs such as NA and Cocaine Anonymous adapt the model successfully. And because the traditions remind the organization of its duty to the alcoholic who still suffers, the fellowship model will continue to adapt- maybe “Nonbelievers Group” will become a common listing in AA meeting directories someday soon.

So, on the principle of starting with the most-available, easiest-to-access, demonstrably-effective tool, we usually advise even nonbelievers to try the Step fellowships. If they don’t work, there are other things to try. However, the Steps may benefit from a little “re-engineering” to increase the nonbeliever’s chances of success.

We’re going to start with the first three:

Step One: “We admitted we were powerless over alcohol- that our lives had become unmanageable.”

The challenge in this step applies equally to the believer and the nonbeliever. Acknowledging that you’ve lost control over your use of a drug, and that the loss of control is having an adverse effect on your life, may be difficult, but if you’ve reached the point of looking for help, it’s ground zero. Why would you engage in a program of recovery for a problem you don’t believe you have?

To “work” this step is simple: Sit down and record any signs of powerlessness and unmanageability you’ve experienced. Keep working backward, and note whether there’s evidence of progression over time. Not sure about what might constitute “signs of loss of control?” Check out the Jellinek Curve (download a copy by clicking on the picture): 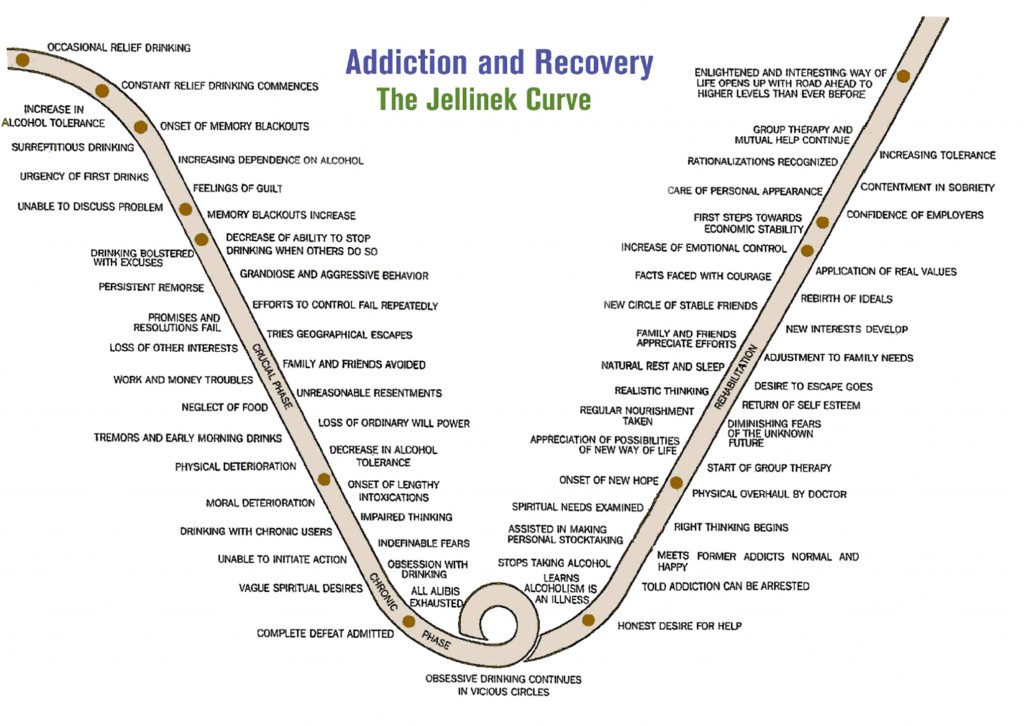 Step Two: “Came to believe that a Power greater than ourselves could restore us to sanity.”

Bang, pow! Smack up against the problem for most nonbelievers. Doesn’t “Power greater than the individual” refer to “God?” AA folks will explain that it can refer to anything you perceive as greater than yourself. True enough, but from the nonbeliever’s perspective, nonsense. Of course it means god. And not just any god, but the Christian God of the Oxford-movement inspired AA founders.

Fortunately for nonbelievers who’ve recovered using AA over the past 65 years, the founders’ intention isn’t binding. Just as they borrowed and changed the concepts of the Oxford Movement to suit their needs, so can we adapt and interpret this concept to give nonbelievers a handle on this important tool. One way many nonbelievers make use of Step Two is by emphasizing the importance of having faith in something outside themselves. One nonbeliever re-wrote this Step thus: “Came to believe that faith in something other than my own battered intellect could restore me to sanity.”

The underlying logic of the Step is clear: If you’ve made attempts to control drinking or drug use- and failed- then what evidence is there that future attempts will succeed, after more drinking/drug use? Failed attempts provide the defeat that drives all of us to seek help, eventually- even if it’s just pulling out the manual and finally reading it, when we can’t get the new DVD player to work.

Yet hand-in-hand with the sensation of defeat comes hopelessness. And unless we can combat that hopelessness with faith in something, we’re still stuck. Finding faith, even if only by observing the large number of people who have succeeded in doing what we aspire to do- achieve and maintain sobriety- keeps us moving forward. And to those who say that “only” belief in god (usually their own version of god, too…) works, we present the evidence of thousands of nonbelievers who’ve successfully used the 12 Steps and group support based on their own faith: faith in the logic of recovery, achievable success, and support from others.

Faith also means believing that sobriety will eventually restore sanity. That’s an important point, because in the very early stages of recovery, it sure doesn’t always feel that way. And although there’s no evidence that alcoholics have any special premorbid psychological disorders, the experience of alcoholism is enough to give anybody the symptoms of major mental illness. Wherever intellect and logic don’t seem enough, and the uncertainty of recovery seems overwhelming, Step Two tells us: Just keep trying.

If you want to “work” Step Two, try this: Record a list of the things you have faith in. Maybe it’s friends, or family, who care about you. Maybe it’s the fundamental principles of the scientific method. The expertise of your rehab counselor. Then think about, and record, how each of these things will help you in recovery. If you can, discuss your list with a knowledgeable, supportive person.

Step Three: “Made a decision to turn our will and our lives over to the care of God as we understood Him.”

Assuming we’ve made it this far- admitted powerlessness over alcohol/drugs, and found something outside of ourselves to serve as a source of strength and guidance through the initial weeks and months of recovery- the exclusionary language of this Step shouldn’t stop us now. (Exclusionary, indeed- not only does it leave the nonbeliever out, the assumption that believers must be fixated on a god with a “Y” chromosome, or only ONE god, leaves a good many of the world’s believers out as well- if we allow ourselves to be left out by language, that is.)

The biggest challenge yet: Permitting the “higher power” to lead you into sobriety. Here’s an example from a nonbeliever who determined that his ‘home group’ fit the definition of ‘higher power’ for the purposes of his recovery. With three months of sobriety under his belt, he came to a meeting jubilant over winning a radio ‘giveaway contest’- a cruise vacation package, to be taken the next month. The group’s response wasn’t what he expected:

“I was on one of those once. Everybody was drinking, all the time. I stayed drunk the whole week!”

“Slippery places and slippery people… all by yourself on a floating cocktail lounge?”

“Not sure you’re ready for a cruise- you haven’t been sober long enough. You could lose it.”

He was pretty angry, you can imagine. Pointed out how diligently he’d been working the Steps. Accused them of trying to spoil the first real ‘reward’ in his sober life. His arguments: It wasn’t fair, he deserved it, it was a ‘reward,’ they were just trying to take it away… Wow. Sounds like a kid rebelling against authority, doesn’t it?

Another example: A woman just a few months into recovery who wanted her higher-power-counselor to help her deal with her marriage issues, right away. “I know it’ll take some time for my memory to clear up and my thinking to get better… but my marriage is an issue now.” Check out the duality there- she knows her brain still isn’t working too well, but she wants to apply it now to conflicts that were caused by that same dysfunction.

This is a regular feature in early recovery from addictive disease: We perceive ourselves as beset by a whole host of problems, one of which is the addiction. But in reality, the addiction is the problem driving all the others.

Which is why it’s so important to have outside guidance. The language of Step Three says “give over your will to the care of God as you understand him,” and for nonbelievers to use this Step, the “as we understand” phrase is the key. What’s likely to provide you with the best recovery guidance? There’s your ‘recovery guide’- maybe a better description for nonbelievers than “higher power.”

To “work” Step Three, you can: Record a list of 3-5 most pressing problems in your life right now, wherever they are- home, work, health, legal issues, etc. Describe each one in a few sentences, and then re-state the problem as a decision you intend to make, like taking action, getting more information, wait and see- whatever. Then share the list with your chosen recovery guide. If your decision disagrees with their guidance, make a conscious effort to do it their way, at least for now. See if life doesn’t start to improve. Over time, you’ll notice that your decisions tend to match your recovery guides- because now you’re learning from your experience.