Families: On Being a Newcomer in a 12-Step Group

What can a newbie reasonably expect from participation in Alanon et al? Support, although perhaps of a type you don’t initially recognize, since it doesn’t involve much sympathy. 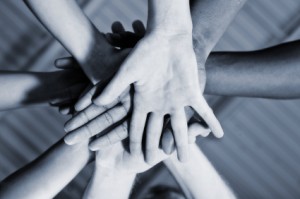 A counselor complained: “I send family members to Alanon and they go to a few meetings and drop out.”

There’s a reason for that. A 12 Step support group can be a real help to families in recovery – as important to them as AA is to the alcoholic. But there’s a learning process involved. It’s easy for a newcomer (‘newbies’, we call them) to lose interest before the benefits arrive. Some typical newbie responses to the first few meetings:

And the single most common objection: “I still don’t see why I have to go to meetings when I’m not the one with the problem.”

Those first six objections parallel what you hear from alcoholics when they first try AA, and reflect the difficulty most of us have when we’re exposed to a new community – one we were not certain we wanted to get involved with in the first place. We go into the those in more detail in this article.

The last objection is more complex. If you’re not the ‘sick’ person, why do you need to be so extensively involved in recovery? It’s one thing, you might argue, to attend family counseling sessions with the alcoholic and a professional. But to travel out on a cold night to sit around in a church basement with a bunch of fellow sufferers — how could that possibly help? That’s another question we’ll return to in a later section.

An observation:  Just because people attend the same meeting doesn’t mean they’re participating at the same level. You have those who are actively involved and others who now attend sporadically, as well as the inevitable newcomers. All attend for different reasons and expect very different returns. They may as well be at different meetings; their experience is that diverse. But if a meeting is working properly, everyone should get something out of it.

Not all meetings work properly. That’s why you can’t judge the program on the basis of just a few.

The typical newcomer attends because someone else strongly advised it. That advice may not have included an explanation of how things work (like this great one from another recovery website.) 12 Step groups speak an unfamiliar dialect; their little rituals may seem strange. This can discourage the unprepared.

What can a newbie reasonably expect from participation in Alanon et al? Support, although perhaps of a type you don’t initially recognize, since it doesn’t involve much sympathy. Common sense advice, naturally, about how to live with and relate to an alcoholic in recovery. Some helpful suggestions for managing your own problematic feelings, such as anxiety and resentment, and for living with the possibility of relapse. But for most newcomers, Alanon involvement brings home the reality that we’re not alone in the struggle – and never were. There’s a way out, and others have found it.

To know that intellectually is one thing. To experience it in the company of others is quite another.

Those who stick with Alanon find themselves establishing deep friendships and sharing very personal hopes and dreams that perhaps they share with no one else. They no longer worry about being judged. They learn to ‘work’ the 12 Steps in new and surprising ways that they didn’t imagine as a newcomer.

If you dropped out early in the process, of course, that never happens.

Family 12-Step -More from this series:

This is so true. I went to my first Al-Anon meeting to help the alcoholic and was offended when I was told I had a problem! I didn’t relate, didn’t understand the term, “program,” and wasn’t feel comfortable with the frequent mention of God. I didn’t return until the alcoholic, who’d been sober, returned to drinking. I thought I’d go to a meeting to set an example. Fortunately, someone invited me to hear a longtime member speak, and I heard something I could relate to – how she’d taken out her frustrations on her children. It continued, but it was 6 months before I got a sponsor and much longer until I realized that the meetings were for me.
Darlene Lancer, MFT
Author of “Codependency for Dummies”
http://www.whatiscodependency.com