Craving: Why We Can’t Seem to Get Enough 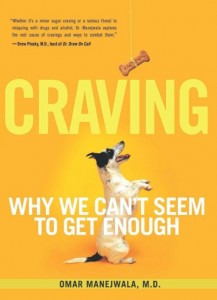 Despite everything that we know about cravings from science, research and experience, there is still an enormous gap between what we know works for cravings and what people usually do. As a psychiatrist who has directed rehabs and an addiction expert who has helped thousands of people change their habits and get back on track, I’ve seen firsthand how cravings can destroy lives. Cravings make us smoke “just one more puff” when we’re trying to quit. Cravings lead us back to the slots if we’re gamblers, or back to the liquor store if we’re alcoholic. Cravings make us give up on our goals. Why do we let that happen? Where do cravings come from and how can we stop them?

I wrote Craving: Why We Can’t Seem to Get Enough (Hazelden, 2013) specifically to answer such questions. As an addiction psychiatrist I saw heartbreaking examples of people giving up just as they were starting to get successful, families torn apart and jobs lost, all because of cravings and their effects. The people I was helping truly believed their problem was the sugar (or the alcohol, or the gambling, or the smoking) and couldn’t see past that to learn that the craved object was really just a symptom of a deeper need that will never be satisfied with “one more candy bar.”

In Craving, you won’t find “the seven secrets to kicking cravings forever” or any other magic bullet. Instead, I share with you exactly what the research tells us about cravings and the strategies that have worked for the patients I’ve helped. I review the complex causes of cravings (the brain science and psychology behind cravings, the powerful social forces that affect cravings and even the genetics of cravings) and then explore what we really know about what works to kick them. Strategies that have published, peer-reviewed, scientific support are emphasized, and myths are debunked. The book contains practical suggestions that a reader could use to immediately begin to gain control over their cravings and achieve their goals. Many of the suggestions are counterintuitive (did you know that mindfulness meditation has been shown to reduce cravings?), but all of the suggestions are grounded in science. I spoke directly with many of the researchers who conducted the cravings studies to clarify what exactly their research showed. In Craving, I distill those down to the essential suggestions that can make a difference in your cravings and help you get on your way to recovery.

I hope you’ll enjoy the book. It recently received a very favorable review in Publishers Weekly.

Omar S. Manejwala, M.D. is senior vice president and chief medical officer of Catasys in Los Angeles, California, and is the former medical director at Hazelden Foundation. Follow him on Twitter as @DrManejwala.