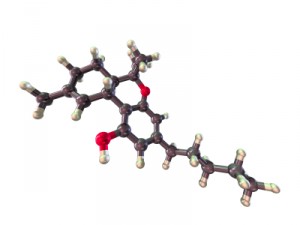 THC is the molecular element in Cannabis that produces intoxication

Does cannabis produce drug dependence? The answer is ‘Yes’, but with some caveats.

Users in countries known for heavy cannabis use – parts of the Caribbean, for instance, or the Middle East – report symptoms of both.   Withdrawal may include anxiety, diarrhea, cramping, tremors, and nausea. More cannabis use quickly remedies it – a clue that they are experiencing withdrawal.  Users report cravings when the drug is not available, another symptom of dependence.

Cannabis-dependent persons report using the drug at times or in places where it puts them at risk (work, school, etc.)

Conclusion: Though cannabis in quantity can produce dependence, many users do not become dependent.

Marijuana as a Gateway

Most patients in treatment started using alcohol and/or marijuana before moving on to the so called ‘hard drugs.’

This is not to say that smoking pot invariably leads to heroin. It means that the majority of hard drug users started not with hard drugs, but with marijuana (or alcohol) – and at a young age. In urban areas, in fact, it may be easier for a high schooler to get marijuana than alcohol.

It has been demonstrated that youth who use marijuana are more likely to try other, harder substances.

Marijuana as a Substitute Drug

Marijuana is often classified as a hallucinogen, but it also has some sedative effect. Chronic users of alcohol, heroin, cocaine, etc. will smoke marijuana as a substitute for alcohol or as an adjunct to their alcohol consumption.

Marijuana as a Relapse Trap

Imagine that someone enters rehab for alcohol or drug use. S/he recognizes the need to stop using booze, pills, or injectable drugs, but thinks: “ I never really had a problem with pot. Why should I stop using it?”  S/he, of course, learns that any drug use can cause a relapse to alcohol or hard drugs, but ignores this and just tells the staff what she thinks they want to hear. S/he thinks ‘I know myself, and pot never hurt me.” Then one night, after smoking some grass, s/he is gripped by a craving for harder stuff. Almost on an automatic pilot, relapse quickly follows.

For younger people who are in treatment for alcoholism and also use marijuana, their marijuana use often goes back further than their alcohol use. The fact that many younger clients refuse to give up smoking pot may account for the significantly higher rates of relapse for young alcoholics.

Those of you who are smoking pot or secretly planning to return to smoking pot, please remember that no one plans to get addicted to any drug, so no one knows before hand whether or not they themselves will eventually develop a problem.

You IMMEDIATLY loose a majority of your credibility commenting on items such as this. Your organization makes WAY too much money off of the “War on Drugs”, which is really a war on citizens. Someone that uses heroin probably started out on breast milk, is that a gateway drug? It does have Cannabinoids in it. What about Sugar? At the molecular level, sugar is very, very close to being cocaine. The thing that makes cannabis a “gateway” is its legal status, by keeping it in the black market, a user is brought into contact with those that are unconcerned about what poison it that they are selling, lumping the most therapeutic plant known to mankind into the same unregulated, unprotected market with vile poisons such as Meth, Krocodile, heroin, bath salts, Molly, X and all the other crap that will actually KILL.
I do agree that it is easier for a high schooler to get weed than alcohol, but again that is because of its legal status, street dealers DON’T CHECK ID. I also agree that young people should not be consuming cannabis, alcohol or any of that other junk due to their still developing brains.
I know this will probably never be posted on your website. Drug usage NEEDS to be treated as a public health and societal issue, NOT a criminal issue. Using fear and propaganda only has the effect making humans more curious and willing to partake of these “BANNED” substances.