Instead of sleazy criminals and foreign warlords, the misuse was initially at the hands of trained physicians, with the confidence of medical authorities. 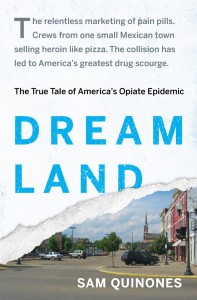 I’ve long wondered how the healthcare professions fell for the absurd notion that opiates could be widely distributed without the risk of triggering yet another opiate epidemic. The answer: They believed it because they wanted it to be true.

I’ve done quite a bit of reading, much of it scientific, some of it lurid sensationalism, but a recent book by Sam Quinones, title Dreamland: A Tale of America’s Opiate Epidemic, introduced me to an important figure I’d never heard of. His name is Herschel Jick MD. Way back in 1980, Dr. Jick, a respected researcher, dashed off a one-paragraph letter to the Editor of the New England Journal of Medicine. The Journal titled his letter “Addiction Rare in Patients Treated with Narcotics.” The thrust of the piece: a brief survey of hospital patients who had been given opiates for pain during their stay suggested that only a tiny percentage of them exhibited the symptoms of addiction at the time.

This wasn’t a study finding. It was really just a comment on something noticed by a curious scientist. There was no experiment, no controls — just data in the raw. The only conclusion we could draw was that it might be worth looking into. But nothing more concrete. As a Texan colleague of mine might put it, “there’s enough hot air in it to pop yourself a bowl of Orville Redenbacher”.

Dr. Jick himself never suspected his flimsy paragraph would help launch a revolution in the treatment of pain. He didn’t realize there was already a willing and uncritical audience within the medical community. This audience had bonded around the desire to improve the treatment of cancer pain, but its focus had quickly expanded to the treatment of all pain, regardless of cause. Up to and including the very broad category of chronic pain.

If there’s a heavy in Quinones’ tale, it’s probably Purdue Pharma, the giant corporation that developed and exploited OxyContin. But even they seem to have acted purely out of business self-interest. They valued financial gain that would benefit their investors. That’s how big business works. We should never expect it to work otherwise simply because we’re dealing with the quality of people’s lives.

There’s a saying drug addicts have: “If it can be done, it will be done.” In this instance, if a drug can be misused, it’s only a matter of time until it is. Only instead of sleazy criminals and foreign warlords, the misuse was initially at the hands of trained physicians, with the confidence of medical authorities.

Just recently I had dinner with the longtime medical director of a big city detox. Virtually all of the heroin addicts he’s treated in the past few years started out on prescription painkillers. He couldn’t recall a single one who began with heroin. No need to, because the prescribed varieties were plentiful. Heroin became desirable when the supply of prescription meds began to dry up.

The medication was the gateway. Heroin was waiting in the next room.

Many of us saw it coming. How? Because we recognized it could happen. And therefore, eventually, it would.

Dreamland: The True Tale of America’s Opiate Epidemic, by Sam Quinones, is available in hardcover, paperback, e-book formats, and audiobook format from most booksellers.