Some years back our hospital ran an ad for their treatment program featuring the medical director with the message that  ‘You don’t have to get drunk to be an alcoholic.’ The ad went on to describe drinkers who were high-functioning and yet unable to stop drinking for any length of time without experiencing withdrawal.

Suddenly the hospital’s phones rang with calls from families who reported their loved ones doing exactly that. “He doesn’t get drunk,” they’d complain, “but he never stops, either. And the amount he puts away– you should see the empty bottles on trash day.”

This pattern, sometimes called maintenance drinking, was described by EM Jellinek in his 1960 book The Disease Concept of Alcoholism. Maintenance drinkers have an elevated adaptive tolerance that protects them from showing signs of obvious intoxication, but have to consume unusually large amounts of alcohol to stave off the pain of withdrawal symptoms. Those symptoms begin as the blood level falls past a certain point, which may be well before 0.00. Drinking is intended to maintain the level above that point. 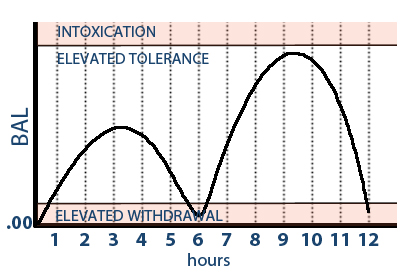 Where daytime drinking isn’t possible, some drinkers substitute a benzodiazepine or other cross-tolerant medication to suppress withdrawal until it’s safe to switch back to alcohol.

Jellinek noted that maintenance drinkers seemed to be less common among AA members, probably because they weren’t experiencing the loss of control, life problems, and impaired function that normally drive alcoholics to 12 Step fellowships. For many, only age and health issues, or an unanticipated dip in that protective tolerance, were enough to finally motivate them to seek help.

Or perhaps an arrest. “I got busted after a fender bender in a parking lot,” confessed an attorney. “Blew something like .16.  Hell, I thought I was completely sober. For me at that time, I probably was.”