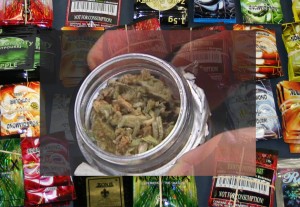 Just recently, authorities reported more than 30 overdoses in Austin, Texas, believed to be related to a batch of synthetic cannabis known as K2 or Spice that had been purchased in Dallas. Such overdoses generally wind up in the ER for treatment of symptoms that include high blood pressure, panic and agitation, nausea and vomiting, and hallucination. Often there’s an initial period where the user is unable to move, followed by another period of aggression and in some cases psychotic behavior. It’s scary for both the user and those around him, and unfortunately, ODs are not rare.

Synthetic marijuana isn’t actually what it claims to be. Instead, it’s a blend of dried medicinal herbs with other substances that have been designed in the laboratory to imitate the effects of cannabis (technical term: cannabimimetics). They can be quite different chemically from the real thing, and since there’s been no formal testing, the user is in the dark as to the risks.

Much of their early popularity has been among college students, usually males. They allegedly played a role in the suspension of football star Tyrann “Honey Badger” Mathieu by LSU a few years ago, and in the recent arrest for possession of Buffalo Bills Pro-Bowl tackle Marcel Dareus.

Why do users turn to synthetics instead of ordinary pot? First, because they believe it is more potent, and the ‘high’ more intense and long-lasting. Second, because pot users are reassured by the appearance of a leafy green or brown product that is designed to resemble what they’re accustomed to. That’s misleading, because analysis of labels on some commercially produced brands has shown them to be quite inaccurate as to ingredients. Some of the adverse effects reported by K2 and Spice users are no doubt related to unidentified substances that adulterate the product.

Which brings us to another issue:  The main ingredients in these preparations have been designated as controlled substances by the DEA and are therefore illegal. Drug producers have responded by changing the composition in ways that we can only guess. This sort of cat-and-mouse game between law enforcement and drug developers has in the past led to increased risk. The user ends up smoking something quite different than he intended.

Cases of Spice abuse are showing up routinely in treatment centers, usually as part of a larger pattern with other drugs and/or alcohol rather than alone. Some of the experiences described by users are quite frightening, along the lines of what we heard when PCP first appeared on the streets.