Models of Addiction: The Moderation Model

There’s always someone who is convinced that with the right support, the right technique, they could once again drink socially. 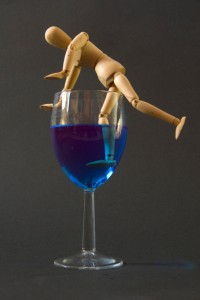 Models of Addiction, Part Five: Moderation, or “A Return to Social Drinking?”

This is the dominant model in America when it comes to discussions of drinking. About 100 million Americans can be classified as ‘drinkers’, and 90% of them aren’t addicted to alcohol. It’s a challenge for them to understand the other 10%.

And the ideal of moderation in all things dates all the way back to the ancient Greeks. They had their problems with drunkenness, too, and no particular success dealing with it.

The moderation model is based on the assumption that because the drinker makes a conscious choice to drink, it’s possible for him to make the choice to drink less. Through an exercise of willpower.

Couple problems with that assumption: The nature of addiction is one. Addiction is characterized by compulsion, loss of control, and continued use despite adverse consequences. Compulsion refers to the ‘potato chip syndrome’ – one drink triggers desire for another. Loss of control refers to the inability to predict key things about your own drinking episode – such as how long it will last, and whether you’ll remember it when it’s over. And alcoholics can be differentiated from other drinkers by their tendency to drink in spite of the problems they suffer – sometimes up to the point of death.

That’s why you can’t trust an alcoholic to moderate consumption by willpower alone. If he could do that, we wouldn’t have called him an alcoholic in the first place.

Nobody tries harder to regain control than an alcoholic. There’s always someone who is convinced that with the right support, the right technique, they could once again drink socially. It can become an obsession.

We should remember that alcoholics practice abstinence only because the alternative didn’t work out for them. But it’s not for lack of trying.

This article is Part Five in a series “Models of Alcoholism and Drug Addiction.” Further articles will explore other models.

I think the real challenge and difficulty is getting the 10% to understand the 90%!

I believe most people who end up with serious alcohol problems can never drink /regain control. However the sdrinking population is not made up wholly of a majority of ‘normal’ drinkers and a minority of ‘alcoholics’. Dependency is a spectrum, and the further you slide into the harder it will ever be to regain control. But there are many people who recongise early/mild stages of dependence, quite for a bit then re-learn to drink moderately. Lots of studies show this.

Such a good article. SO true. If I could just have one, I would. I tried endlessly to just have one.. never worked. Thanks for writing!

So true, Lisa. “Finding a way for addicts to return to ‘normal/controlled’ drinking or using” is the largest, longest-running research project in human history. And pursued by some of the most dedicated, creative, and persistent researchers!

So, if we haven’t found a way yet… what should we be learning from that?

I particularly enjoyed the addendum title “A Return to Social Drinking?”

I am so clear on the FACT that I tried to make it work. Now I love myself too much to try anymore.

As always, a good read. Lisa