We’ve never seen a group that works, right from its inception. Progress toward work usually involves struggle through one or more of these modes. 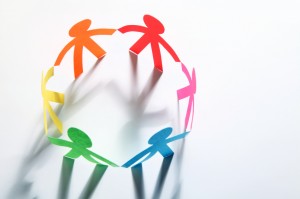 In talking about non-functional groups, we’ll start with a particular (and somewhat controversial) assumption: Simple willingness to invest time and even money in therapy is no guarantee that group members will actually use that therapy to make positive change in themselves or their lives.

These two non-functional group styles are characterized by how effectively they manage to focus– on something other than change.

“It’s a jungle in here.” This type of group comes in two versions, active and passive. In both cases, though, they want the leader to take responsibility for change, thus absolving the members of needing to do so. The actively hostile group will often appoint (tacitly or directly) ‘spokespersons,’ who act as emissaries to convey the discontent of the group. They’ll try to pick a fight or challenge the leader over perceived failures.

“Why are we wasting time rehashing this stuff,” they may say. “You’re the professional, the one who knows all about it, why aren’t you doing anything?” They want the group leader to take over, freeing them to return to a more comfortable helpless mode. They may focus on the leader’s ‘failure’ to participate, to provide materials, information, etc., ignoring their own responsibility to work toward change.

The passively hostile group may avoid direct challenges, but demonstrate their feelings by tardiness, absenteeism, distracting behavior (taking bathroom breaks, getting coffee refills, etc.) until challenged by the leader. Then their excuse may boil down to “See? We don’t know how to do this, so you have to take over.”

Features of the Hostile Group

Bonding: This group bonds negatively around their shared dissatisfaction with the leader and/or discomfort with the task.

Values: While the group still values ‘total time invested’ over actual work done, this group is an advance over helplessness, recognizing the importance of autonomous function.

Structure: This group is often quite rigid, imposing arbitrary boundaries and rules as punishments rather than support for accomplishment. Enforcing the structure itself may become the task.

Mentality: The fight with the designated leader has overwhelmed and replaced the group purpose of dealing with a disease or the problems that brought members to treatment.

Culture: Struggles develop when a member decides they actually want to treat her or his disease, which challenges the majority view that nothing can be accomplished until they “deal with” inadequate leadership.

Instead of openly rejecting the group, the process, or the leader, these group members bond around the notion that simple attendance and willingness to discuss (and discuss, and discuss, and discuss…) will somehow effect behavior change. These groups are often characterized by an abundance of talk, and they’re full of excuses and encouragement for inaction.

“Something good is bound to come of this,” the group’s unofficial motto, represents the group’s commitment to a kind of stasis organized around the assumption that talk is action. It isn’t, of course–action is action. But this group’s reluctance to change may be masked by a relatively high morale and repetitive ‘therapeutic interactions’ that never really threaten members’ inertia.

Features of the Hopeful Expectation Group

Values: Dependency on each other and the leader, to provide “support” as well as companionship. This group can be very social, but may also develop factions and ‘roles’- surrogate leader, sympathizer, etc.

Tradition: Avoiding work is perfectly acceptable, as long as therapeutic-style interactions occur regularly. This group is long on form and short on content.

Mentality: Members encourage the mindset of ‘help is on the way.’ And they’ll do plenty of talking about it while they wait for it to arrive.

Culture: Struggles that arise in this group are often related to dominant group members’ prioritization of dependency over work, and others’ realization that they’re making no progress. This may result in drop-outs.

Negative as they may seem, all of the various types of non-working group have one thing in common: They don’t have to stay that way. In fact, we’ve never seen a group that works, right from its inception. Progress toward work usually involves struggle through one or more of these modes, and sometimes working groups may hit temporary periods of inertia flirting with hostility or helplessness.

Actually, the ‘work mode’ makes an early appearance, sometimes when the group seems most lost or resistant. Learning to identify and nurture the signs of this mode, we can develop it into the group’s dominant style of interaction, making it a “working group.”