12 Step literature suggests that sponsors stick with advice on how to work the Steps, rather than stray into realms better left to trained professionals. 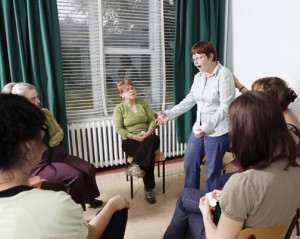 It’s a common complaint: Somebody at a 12 Step meeting gave bad advice. Sometimes the complaint comes from family members, as in “My husband was told our marriage might not survive!” Or from an outraged therapist: “He says his sponsor advised him to stop his meds!” Or worse yet, “They told him to stop seeing me!”

Not much point in denying this happens. Not as often as some believe, but still…  It’s contributed to mistrust and even animosity towards AA and NA found in the professional community. Which is not good, because all too often, the suffering addict or alcoholic needs help from both.

We should remember that 12 Step fellowships are ‘forever nonprofessional’, and thus not subject to the same rules and codes of conduct as a physician or counselor. And they operate on a principle of mutual guidance and support. As one member put it: “We get well by helping others like us get well.”

So we can’t really ask someone in AA or NA or Alanon to keep their beliefs to themselves. That’s not how it works. There’s a constant flow of opinion, both in and outside meetings. Some of the advice a newcomer gets is terrific, far superior to what you might hear elsewhere. Some of it is frankly not very good. There’s no quality control on the process.

12 Step literature suggests that sponsors stick with advice on how to work the Steps, rather than stray into realms better left to trained professionals. It’s a good suggestion, but can it be enforced? No.

In practice, many newcomers establish ‘mentoring’ relationships with more than one person. They seek multiple opinions and then ‘triangulate’ the responses the way a businessman might consult several experts before making a business decision. It’s not a bad model, but far from perfect. As the computer geeks say, ‘garbage in, garbage out’. The trick is locate sources for good advice.

And we’ve all met people whose approach to any problem is to spend weeks or months soliciting contradictory opinions from everybody, thoroughly confusing themselves in the process. That’s actually a way to avoid making a decision.

My advice to the clinician who works with a client involved in 12 Step groups: Make it clear that it’s fine to seek advice from multiple sources. Your role is to help your client make good decisions based on the information available.

So before taking action, let’s talk things over, OK?

[…] about the problems caused by misinformation and over zealous sponsors in AA which is worth a read. https://old.treatmentandrecoverysystems.com/library/articles/good-and-bad-advice-at-12-step-meetings/ I certainly saw some amateur armchair doctors in AA and have seen the damage they can do, with […]

Right out of the gate, you’re wrong. “Not as often as some believe, but still… It’s contributed to mistrust and even animosity towards AA and NA found in the professional community. Which is not good, because all too often, the suffering addict or alcoholic needs help from both.” The vast majority of the professional community are indoctrinated steppers. Everyone knows this. It’s very difficult to find a professional who is NOT a stepper. Stop it.

Where you’re correct is that there is no quality control in 12 step groups. The fact that we are talking about a dangerous cult religion is enough for the majority of people who are exposed to the steps and the devotees to walk out and never come back. At best, your 12 step cult can claim 5% recovery rate which is merely the rate of spontaneous remission. This cult religion takes credit for those who were going to change their behavior with or without ‘meetings.’ The problem is that most members are brainwashed to give all credit for their choices (they are NOT POWERLESS), to the program and they can never leave. Never. If they do leave, they are convinced they will end up in three, (and only three) places. 1) Jail 2) Institution 3) Dead. Hogwash.

Finally this statement is dis-empowering and just degrading: “And we’ve all met people whose approach to any problem is to spend weeks or months soliciting contradictory opinions from everybody, thoroughly confusing themselves in the process. That’s actually a way to avoid making a decision.” This kind of blaming is rampant in 12 step cults. After all, you cannot trust your own thinking and you are powerless over people, places and things (everything). Rubbish. This kind of thought-stopping crap causes cognitive dissonance. It’s a way of saying, “take the cotton out of your ears and put it in your mouth.’ One of many pieces of ‘advice’ one will get at a 12 step meeting. “Don’t quit before the miracle happens.” “Fake it till you make it.”

Problem is … there is no miracle available in a program that lies by claiming itself to be ‘spiritual not religious’ and there is no ‘making it’ since you can check in but you can never check out. 12 step groups are their own mind-control religion plagiarized and bastardized from the fundamental christian group known as Oxford.

There is nothing but bad advice available in the dangerous cult religion commonly known as the 12 steps. Stay away. Stay far away.

I think you have done a good job highlighting some of the problems that people can face in a 12 step or other type of self help support group. I feel that many of the ideas in AA are very broad based and of course will not help everyone, but evangelical members who feel that the steps have helped them, will push some very old fashioned ideas on anyone who will listen.
When I had help from a good therapist, they spent a long time talking with me and getting a good understanding of my background and situation. This will not happen in an AA meeting and a sponsor will not always know what to ask somebody they are trying to help. Some sponsors will just have a stock answer that involves prayer for almost anything. I was certainly made to feel guilty about taking medication, which I do not feel was helpful.
It is important that people realise 12 step groups are there for support and are not treatment although of course this does get confused when some rehabs are really just offering a 12 step introduction and not proper therapy. I think that it would be helpful if literature was updated to mention these potential problems and also remind people at the start of meetings that sponsors are not Doctors.
I got some good advice and some very bad advice in AA and decided to leave several years ago. I fell that most people who do feel better do this, leaving behind those who are obsessed with the steps. These are sadly the type of people who are probably going to give the worst advice. We all need to take responsibility for our own recovery and not simply put it in the hands of others in our chosen support group. They cannot do our recovery for us, and we need to become independent if we are really going to recover.

“Everybody’s got one.” You know that old adage that compares opinions to sphincters? 12Step Literature refers to them as “Bleeding Deacons” – thinking that their seniority is unto itself authority. My understanding of sponsorship is: showing the sponsee how and why it was that YOU got Clean and Sober, which has NOTHING to do with condescension, manipulation, Drill Sargent manners. The rule I favor is firm but fair and — like a good counselor — strong listening skills. At 12step meetings there ” are those too who have grave emotional and mental disorders” so “yes”, it is a forum and should be regarded as such. We had a saying: “You take what you need in the present moment and guilt-lessly leave all the rest”. with only a 5% success rate, the newcomer is not the only one listening. Any time a share includes “Dogma” and unsolicited advice, what’s being said is usually not for the benefit of the listener, but for the insecure ego of the speaker.

my concern is that newcomers who are dying to get clean, seek the answers that they want to hear and possibly lead to their death because they haven’t heard what they needed to hear. NA suggests that we take direction from our sponsor. I am willing to take wrong direction occasionally than to seek out what I want to hear and do what I “think” I need to do. Our best thinking got us in the hole, our own thinking is not going to get us out. I agree with working with professionals for outside issues that aren’t a part of this disease. But an older cleaner wiser person can see when a newcomer is hiding under the guise of other things and getting other treatment for what is clearly the traits of the disease of addiction. I am clean today because I tried all the other options that ‘I” thought was best, and then surrendered to taking directions and working the steps. I use the programme of Narcotics Anonymous to deal with all of lifes problems.
Thanks for reading <3

What I think when I read this is some sage advice someone gave me long ago. “Lean on the program, not the people in the program. The program is written in the book; specifically the first 164 pages of the book. If you want/need more there is the 12+12.” More great advice to implement.

Just want to thank you for this and other postings. I enjoyed reading your insights!.