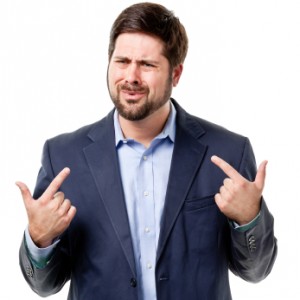 Dealing with denial used to be part of every counselor’s training. Nowadays, not so much. I listened to one trainer insist that his students switch their focus to resolving ambivalence about change. Well, I’m sure there’s a lot of ambivalence around, but I see no shortage of denial, either.

Both terms have their roots in psychodynamic theory.  Ambivalence refers to having strong positive and negative feelings towards a choice, an activity, a person, etc, at the same time. It’s a common barrier in treatment. If you’ve been dependent on heroin for a decade, you probably feel both eager for, and terrified of, a lifestyle without the drug. That needs to be addressed in counseling.

Denial is an unconscious defense against anxiety-provoking reality. The subject isn’t consciously aware of it. One wealthy patient emphatically rejected the idea that his heavy cocaine use could land him in trouble with the law. “I’m not that sort. I’m too careful,” he insisted. But when at one point his attorney asked him about police surveillance in the area where he purchased drugs, his eyes suddenly grew wide with anxiety. That possibility hadn’t sunk in before.

It seems to me that it’s entirely possible for one person to be lying, ambivalent, and in denial at the same time. The conscious deception is directed at others. The ambivalence is an emotional state. And the inability to accurately assess or acknowledge the extent and severity of one’s own problem is, in psychodynamic terms, denial.

These things are not exclusive of one another.

An example from real life: Walter’s parole officer confronts him about a positive urine result. Walter insists there’s been a mistake, the test is wrong, he hasn’t used. He knows better, but with a return to prison at stake, he can’t afford to admit that. So he lies.

Makes sense. But in group just the week before, he’s capable of acknowledging mixed feelings about giving up drugs. It would be great not to have to worry about getting caught, but what would he do when he got depressed if he couldn’t turn to chemicals? Given his history, it’s a perfectly reasonable question, evidence of his ambivalence.

But in another group, he’s quick to explain away his most recent arrests and convictions in terms of outside influences: Bad luck, disloyal friends, an intolerant wife. That’s Walter in denial of adverse consequences.

By the way, like so many before him, Walter has mastered the art of doubling down when he gets caught– raising his voice, becoming irate, accusations of being ‘haters’– a regular cloudburst of distraction designed to make others uncomfortable. Or if they won’t shut up, give him an excuse for an angry exit.

For Walter, and lots of folks in that situation, genuine recovery involves change on multiple levels. A conscious decision to be honest with others, accompanied by counseling to resolve his ambivalence and increase his awareness of his own irrational defenses. Because the patterns are ingrained, progress will be incremental, and periodically he’ll want to throw up his hands and quit.

But there are now many tens of thousands of examples of success. And if they can do it, so can Walter.