Even if such arguments have stymied you for decades, it’s quite possible, with a little coaching, to deal with them effectively in future. 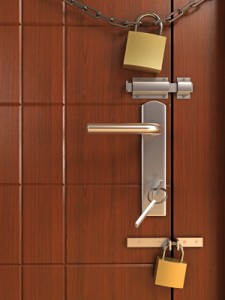 Defenses come in many forms.  They all have three characteristics:

By the time alcoholism or addiction have reached a middle or late stage, defenses have escalated to a pathological level – meaning they’ve become part of the illness. But they’re still rooted in normal human behavior.

There are a host of psychological defenses, but six that we pay particularl attention to, because they’re the ones we’re most likely to encounter during an intervention. They are:

To determine which of these you’re likely to encounter in an intervention, ask yourself (and the members of your team) a single question: “Suppose we asked the alcoholic to go to treatment. He or she would say no (of course they would, or you wouldn’t be considering an intervention). When you asked why not?, what would he say?”

“I don’t care what you say, I know myself, and I’m not an alcoholic.

“I’m drinking too much, but it’s because I’m under a lot of stress right now.”

“I can’t think about quitting til I get my work situation straightened out.”

“Experts disagree about how much drug use makes you an addict, so why should I listen to experts?”

“I’m getting a lot of money from my lawsuit, that will solve all my problems.”

Any of the above sound familiar?

Resistance can be overcome. At root, remember defenses are irrational – based on fear. They just sound convincing. Over the years, the addict may have come to invest them with great passion and feeling. That feeling becomes an obstacle too.

The fight/flight response is common with addicts when they are challenged. If they can escape, they escape. If they can’t, if they’re cornered, they can produce a tremendous amount of anger – based once again on their fear. Remember, with middle and late stage addicts, they quite probably already have experienced enough problems to motivate change (even if they’ve managed to hide many of them from you). The mystery isn’t how to get them to change, but why they haven’t already.

Psychological defenses are at the root of most of the addict’s objections to treatment. That’s most, not all. But at the very least, the main ones that confound efforts to intervene.

With a reluctant alcoholic or addict, you’ll probably encounter half a dozen of these defenses in just one short conversation. You hear them over and over again. Go to the first session of a Court-required class for DWI offenders, and listen. The instructor will probably ask the students for an account of what happened the night they got arrested – and watch the defenses fly. It’s great training for counselors. Dealing with these defenses is part and parcel of the therapeutic process.

Even if such arguments have stymied you for decades, it’s quite possible, with a little coaching, to learn how to deal with them in future – not only for purposes of intervention, but for the rest of your dealings with the addict. We have three advantages in in an intervention situation:

Download the FREE Cheat Sheet! A 1-page summary of the “Big Six” defense mechanisms, how they work and their antidotes. Just click the image: 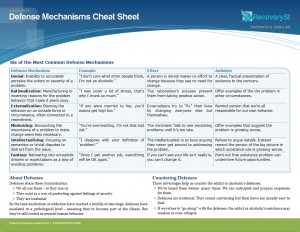