Once such substances get a foothold in a region, they’re extremely hard to eradicate. 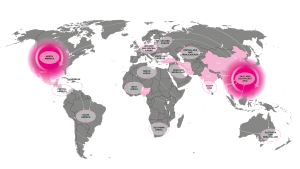 For the past twenty years, the United Nations has compiled a data-rich report on the state of drug use worldwide. You can read or get your own copy, here.

A few observations of my own:

Fentanyl is playing an ever-larger role in opioid use in North America. It’s fentanyl that gets the blame for the dramatic increase in overdose fatalities. In recent years, much of the illicit fentanyl that shows up here comes from China. It’s often sent via the postal service. If the Chinese were to go out of business, I doubt it would be difficult to replace that with domestic production. Fentanyl is just too easy to make, which is also why it’s cheap and available.

Then there’s tramadol, another synthetic opioid. When I had surgery a few years ago, I declined the offer of Oxycontin at discharge and the surgical team immediately pushed tramadol as a safer alternative. I wound up not taking any of that, either, since I didn’t need it. Probably a good idea, since the medical websites I consulted described it as “high risk for addiction and dependence… Can cause respiratory distress and death when taken in high doses or when combined with other substances, especially alcohol.”

I guess the surgeons hadn’t read the warning. They certainly didn’t pass it on.

Anyway, tramadol abuse and addiction plagues nations of Africa and Asia the way fentanyl afflicts the U.S. Once such substances get a foothold in a region, they’re extremely hard to eradicate. The best we can hope for is effective management of the problem. That involves investment in treatment as well as law enforcement. Governments frequently fail to make that investment, which allows the epidemic to continue.

About drug use disorders: the Report puts the number of persons with substance use disorders at 31 million worldwide. As a potential treatment population, it clearly exceeds the available resources. I’d like to claim that the US is at least among the leaders in access to treatment, but I suspect I’d be lying.

Now for the issue that gets most of the attention: Fatal overdose. According to the Report, there were 450,000 of those, as recently as 2015. That doesn’t include the much larger number of nonfatal ODs. It’s common for opioid patients to experience multiple overdoses before finally entering formal treatment.

Overdoses, as serious as they are, do not always motivate treatment. You’ve probably heard complaints from first responders about people getting up and walking away from the scene after they’ve been revived. The emergency folks have to stand there and watch them, knowing they may see them again soon. A few jurisdictions, such as one in the Tampa area, use an existing state law to compel treatment.  They represent a small minority, however.

I know this isn’t a very encouraging picture. I’m sure there are extremely dedicated individuals and organizations working to put an end to this epidemic. I’m hoping at some point they’ll get real assistance from their governments. The world needs it.