Some states have gone bonkers in their haste to make medical pot available for a host of conditions where it likely won’t be of much use. 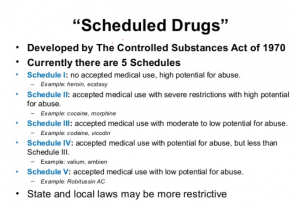 The New York Times editorial board weighs in on cannabis policy, in a piece titled “Stop Treating Marijuana Like Heroin”.

It’s an argument that’s been made often enough in the past, but IMO ignores a much larger problem: Our drug laws and policies themselves have never made much sense. Period.

Yes, alcohol and tobacco, our two fully “legalized” substances, are responsible for the greatest number of fatalities and assorted health consequences– not only because they’re so widely used, but because they happen to be extremely toxic, and factor into a host of damaging medical and social problems. So why are those two legal while others are not? Because they’ve been around so long. And because Prohibition failed. And because plenty of citizens want to drink alcohol and smoke cigarettes, and I don’t mean just those who were addicted.

You could argue (and it has been argued) that even heroin is less destructive to health than alcohol or tobacco, and therefore ought to be legal too. But the problem with heroin, like many potent opiates, is that a high percentage of those who use it will go on to become dependent– often to the exclusion of most of the rest of their activities.

We’ll need to be alert for new and innovative synthetics, such as those from pain medicine, that somehow find their way into common street use. They’re easy enough to manufacture in outlaw labs, in the US or faraway places like China. There’s already a market and a distribution network for these.

Cannabis may have a role with certain types of pain, but mostly in the form of medications, not via smoking (which is what many people think of when “medical marijuana” comes up). Some states have gone bonkers in their haste to make medical pot available for a host of conditions where it likely won’t be of much use. Entrepreneurial types, always alert to the next big dollar opportunity, are racing to exploit a trending market that they suspect may not last all that long.

There’s a continuing drumbeat for research into various hallucinogens, some of which were developed for legit medical uses, but like the opiates, soon escaped into the wrong hands. That’s what got them added to the more restrictive categories in the first place. Most do not produce the sort of tolerance and withdrawal we associate with addiction, which is good. But they can be seriously mind-altering, which suggests a potential for harm when used in less closely monitored settings. That implies the need for controls.

Which brings us to so-called “synthetic marijuana”, usually not cannabis at all, but other plant material augmented with psychoactive chemicals of unknown type. It’s that “unknown” element that earns headlines for these substances, and not in a good way.

Cocaine and crack may have faded from the public consciousness, but both are still around in abundance, and methamphetamine is bigger than it ever was. There’s nothing to stop an inventive chemist from producing new stimulants, either. If you’ve spent time with a heavy meth user, you know how unpredictable they can be, once paranoia has set in and they’ve abandoned regular sleep and eating patterns.

Anyway, I have a proposal. Instead of wasting time and energy debating the relative hazards of each drug, alcohol versus pot, pot versus cigarettes, in an effort to be ‘fair’ to one drug or another — why not start over from scratch and redesign the drug laws based on what we’ve learned from modern science? Of course, modern science is far from perfect, and much of the research we read now won’t stand up to scrutiny. So there will be plenty of room to argue, and arguing may be what we do best.

My hope is we might eventually come up with a system that doesn’t make the average 13 year old’s jaw drop in bafflement when we try to explain it to them.