Responding to an Epidemic: Narcan 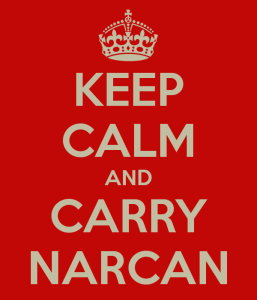 In a recent post I talked a little about the barriers that can emerge when we go to respond to a drug abuse epidemic. A good example might be the use of naloxone, sold sometimes as Narcan– the remarkably effective ‘pure antagonist’ routinely used around the world to  save the lives of overdose victims.

Often the barriers are legal. In many states, naloxone, a prescription med but not a controlled substance, must be dispensed by a licensed professional, such as a physician, nurse, or  pharmacist. Unfortunately, relatively few ODs occurred in the doctor’s office or the pharmacy waiting area. That can mean the overdose victim has to wait for emergency personnel to arrive to administer it. Sometimes, that’s not soon enough. So to make this lifesaving drug more accessible, health authorities began to recommend that it be made available to other first responders — police,  fire, jail staff, shelter workers, even volunteers who’d been trained in its safe use.

That meant the involvement of state legislatures, who needed to enact new law to cover the practice. If you’ve ever worked with your state House or Senate, you know how difficult it can be to change the law. In our state, the issue was left on the table for a couple years due to a fall-off in the OD fatality rate (I guess they hoped the problem had gone away). When the OD issue  roared back in 2015, as users shifted to heroin, state government was left scrambling to make up lost ground.

Public health experts could have explained to legislators that drug epidemics often featured ebbs and flows in patterns of use, before the tide finally began to turn. The best approach is to initiate good prevention practices early on, so they’re already in place in case the need arises.

There were also some objections from medical personnel about unlicensed persons dispensing a prescription medication like naloxone. I thought that was a stretch since as an antagonist, naloxone has no direct impact other than to reverse the effect of an opioid. The danger, it seemed to me, came from not administering it. It’s true that if the OD victim is an addict, naloxone could precipitate withdrawal – but that too is far less dangerous than allowing him or her to remain unconscious till a licensed healthcare professional shows up.

The dramatic effectiveness of naloxone is a good illustration of the “lock and key” model of drug action.  Because of its high affinity with the opioid receptor, naloxone displaces heroin, methadone, or another opioid from the receptor site, in effect ‘canceling the order’ to depress the nervous system. It’s impressive to watch. I witnessed an IV dose reverse coma in less than a minute. An IM injection might take a few minutes longer.

Outside the hospital, naloxone is usually administered via a nasal inhaler. Because the half-life of most opioids exceeds that of naloxone, repeat doses are sometimes needed. The person who administers it needs to stick around to monitor the outcome. Occasionally the OD victim will wake up agitated and in withdrawal, which can require further monitoring and management. That’s why training is important.

Still, some communities have gone so far as to successfully train active drug users to administer naloxone to their friends who OD. Believe me, if you can teach heavy drug users to save one another’s lives, you’ve opened up a whole new area to harm reduction.

On occasion, overdoses have occurred inside drug treatment facilities. Why, you ask, would an addict smuggle drugs into a program to use them? “I figured it’d be safer,” one explained to me. “I knew the stuff was supposed to be real strong. So I thought if I’m already in the hospital, they’d be more likely to save my ass.”

Fortunately, a nurse stumbled on his unconscious form during a bed check, or he might not have been around to explain his reasoning.