Alcohol still gets credit for close to 90,000 deaths every year– more than other drugs, even in the middle of an epidemic. 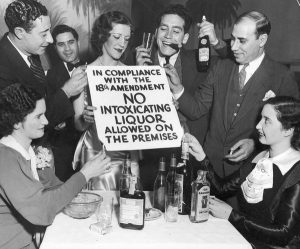 I’ve never been a fan of prohibition by law as a way of dealing with substance abuse. Seemed to me there were already way too many dedicated drinkers and drug users for a belated attempt at a ban.

Even if blanket prohibition were theoretically possible, it’s too late.

I do appreciate the arguments made in this piece from the Vox website, challenging the popular notion that  Prohibition was an utter failure. Turns out it did achieve a number of its stated goals, in terms of both public health and social welfare. That it failed as a practical solution isn’t open to dispute. But that larger failure does not erase its other benefits.

The article won’t change anyone’s mind. But it could expand your perspective.

Similar proposals for a prohibition-style solution were made during the early ascendancy of the manufactured cigarette. Public health experts recognized the dangers involved with mass smoking. That hadn’t been a big issue in the days of roll-your-own and snuff. Once companies began wholesale distribution and marketing of cigarettes, by pack and carton, everything changed, and quickly.

At the time I doubt anyone recognized that smokers were actually addicted to cigarettes. That came later, over the energetic opposition of the tobacco industry, desperate to protect its profits. Remember the Tobacco Institute? Essentially just a propaganda outlet, but they got away with it for a long time. Served as a model for some of today’s industries.

As with alcohol, America switched to taxation of cigarettes as a way to suppress consumption. To an extent, that has worked. People smoke less, and we no longer fret about the next Al Capone. But from a public health standpoint, the results are mixed.

And alcohol still gets credit for 90,000 deaths annually– more than the other drugs, even in the midst of an opioid epidemic.

Recently, attention has turned to the adverse health consequences of sugary sodas, particularly for children. Initiatives to increases taxes have faced opposition, mostly funded by the beverage industry (no surprise there). In our community, revenues from a soda tax were to be used to fund early childhood education. Even that wasn’t enough, and the initiative was roundly defeated at the polls.

Oh well. Back to the drawing board.