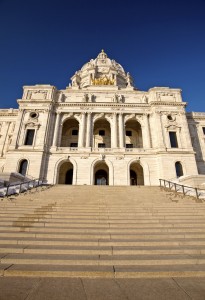 One reason people are so reluctant to deal with the government: It can be a bit like visiting the head office of Giganto Corporation and getting shunted between departments. You talk to a whole bunch of folks who are empowered to say “no” to your request, instead of the one who has  the authority to say yes.

Reminds me of that old Lily Tomlin sketch on Laugh-In: “We don’t care. We don’t have to. We’re the phone company.” They’re more polite nowadays, but the outcome may not be much different.

A bureaucracy exists to implement the laws, rules and policies of the current government. Staff may have considerable authority within the narrow limits of their position, but not outside of it. A manager may sympathize with you, but without authorization from above, can do little to help. That’s the “City Hall” that we supposedly can’t fight.

But the bureaucracy must pay close attention to the politicians who make laws and fund their departments. And politics can be erratic and even messy. You may have noticed.

People who run for elected office have to be re-elected. The shorter the term– for instance, two years for a US Representative– the more energy and time must be devoted to simply hanging on to the job. That means campaigning, and gathering support for your campaign, and raising money for campaigning.

The bureaucrats are often the ones who can direct an advocate to points where the system needs improvement. But the influence of the voters is felt most among the politicians.

Just the other day at the pet food store the cashier, a retiree, told us about his struggle to get approved for Social Security. Eventually he went to his Congressman for help (Social Security being a Federal program). Had it straightened out within a month. That doesn’t always work, but it does often enough.

Fact is, every politician knows that a satisfied voter is a likely vote.

In America, not enough people vote. That’s true even in Presidential years, but especially in midterms and in the myriad smaller elections that take place in every community. This is amazing to people from other countries, where the vote is precious.

Last year one former Governor was asked about the influence of a large minority population. “Those people don’t vote,” came the response. I felt like reaching through the screen and smacking her.

Unfortunately, she had a point.

That’s why it’s crucial for an advocate to build a base of support among likely voters. And keep that support alive, through continuing contact. So it can be brought to bear in every relevant situation, large and small.