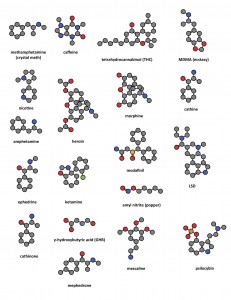 A brief update on two drugs that seem to be showing up more often in treatment settings, usually as part of a polydrug pattern:

Mephedrone got a lot of attention in the UK, where at one point it ranked among the most common drugs of abuse, under the street names Meow and MCAT. It’s a synthetic stimulant with effects that are closest to the cathinones– stimulants derived from the khat plant used for thousands of years by the indigenous peoples of Africa’s Horn (now Ethiopia, Djibouti, and Somalia).

MCAT can be inhaled, taken orally or even injected. Users seek it out for a promised increase in excitement and euphoria, along with a (temporarily) enhanced sex drive. The effects usually last about an hour.

A 2014 article in the British Journal of Pharmacology compared mephedrone to Ecstasy, concluding MCAT is less dangerous in terms of hyperthermia, but more likely to produce dependence and discomfort after ceasing use. That may be because it’s getting into the brain more quickly than MDMA.

Ordinarily, a mephedrone user in treatment will report using the drug in combination with alcohol, cannabis, or stimulants. We often hear that such combinations are the best way to produce the desired ‘high’.

GHB (Gamma Hydroxybutyrate) is often referenced alongside Ecstasy, but the two drugs have nothing in common, pharmacologically speaking. Where Ecstasy is a form of amphetamine stimulant, GHB is a central nervous system (CNS) depressant with pronounced sedative effects that last a couple hours. It’s been used as a general anesthetic as well as a treatment for insomnia, depression, narcolepsy (I’m not making that up), and even alcoholism. Ironically, because GHB is found in small amounts in the human body, users may refer to it as a ‘natural’ high. Small amounts also appear in fermented beverages such as wine.

GHB is known on the street under names such as G and Georgia Home Boy. You’ve no doubt read about it in the context of date rape. It’s relatively easy to take too much at once, resulting in excess sedation, slowed respiration, dizziness, falls, and even coma. GHB users may vomit– never a good idea when you’re heavily sedated– and that has reportedly resulted in deaths.

An interesting (and perhaps ominous) sidebar: Because GHB has only two ingredients, it’s remarkably simple to manufacture at home, and therefore is often produced by amateurs who don’t spent much time worrying about quality control.

GHB usually shows up in treatment as part of a pattern with MDMA, marijuana, alcohol, etc. One patient told me about mixing homemade GHB in a glass with Red Bull and cheap champagne.

The literature isn’t clear on a withdrawal syndrome exclusive to GHB but anecdotal reports suggest it can be benzodiazepine-like in some cases– characterized by prolonged anxiety.

My guess is that unless you work in a program in an urban setting, you’ll see mephedrone and GHB only rarely. Then again, there was a time when heroin addiction was primarily an urban phenomenon, and that didn’t last. So we’ll have to wait and see.