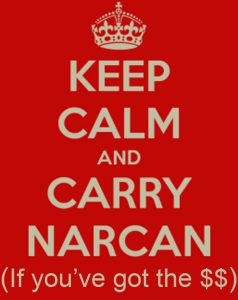 Here’s another medication that seems to have ascended rapidly up the price ladder: naloxone, the med we depend on to reverse an opioid overdose. That’s not good, given the reality of 30,000-plus actual fatalities last year.

As one expert quoted in the article said: This is NOT the same thing as raising the price of snow shovels when a storm is on the way. We’re talking about people’s survival.

Price increases, particularly these very dramatic ones, make the medication inaccessible for many  who need it most. Such as family members and others in position to administer naloxone at time of OD, thus preventing a fatality. Also, the nonprofits who seek to supply naloxone to families at little or no cost.

Does the pharmaceutical industry profit? Well, of course. Revenues from the product are up 400% in the past five years.

Big Pharma reports providing free injection devices to some of those nonprofits but it feels almost like a loss leader, intended to recruit new customers for subsequent overcharging.

Companies argue price hikes are needed to support new research leading to advances in medicine. The counter-argument: such advances aren’t significant enough to justify the size of the price increase. Which takes us back to the issue of profiteering.

Hardly anyone is coming up with genuinely new drugs in behavioral health. To support revenues, companies naturally seek to augment or alter older products that can be sold at a much higher price. Naloxone– a drug that despite its usefulness has no real action of its own, and costs little in its original form– happens to be one such product.

It’s not the only one. Here’s an article on buprenorphine pricing.

A few months ago a lawsuit was filed by 35 states and the District of Columbia, alleging that the maker of Suboxone manipulated patent laws and hyped safety concerns for the sole purpose of justifying another big price leap. The charges themselves were based in evidence including internal memos. They seemed to show company execs plotting to keep the price inflated.

From an economic perspective, it appears to have worked. The CEO’s pay package doubled in 2015, due to a performance bonus. He made $28.7 million. Still, he’s considered a bargain compared to his predecessor, who managed to scoop up a cool $99.9 million before his departure.

OK, now it makes sense. You fork over that much cash for one employee, you probably have to price-gouge. Or, ahem, change your business model.