It’s easy to take too much. When that happens, a coma may result. After waking, it’s common to have suffered memory loss. 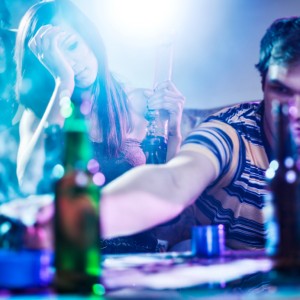 You’ve no doubt heard of GHB (gamma-Hydroxybutyric acid) as a notorious “date rape” drug. The story doesn’t end there. Turns out it’s now popular as an intoxicant among urban “club kids”, in direct competition with longtime faves such as Ecstasy.

Here’s an article from The Guardian that illustrates the problem.

It melts plastic and can kill – so why is club drug GHB on the rise?

We get a look at two young Englishwomen as they dose and re-dose on a schedule throughout the course of an evening. The idea is to maintain a level of the drug in the system that sustains euphoria without putting the user to sleep. You can tell as you read that is something of a challenge. On other occasions, I suspect things have not gone well.

Unfortunately, there do appear to be some consequences to repeated use, at the moment only poorly understood.

In terms of drug class, GHB fits in the broad category of CNS depressants, along with alcohol and the benzodiazepine sedatives. Dropping it into someone’s drink when they’re not looking is a way of rendering them temporarily sedated or even unconscious, via synergism. That’s the date rape scenario.

Initially, researchers hoped that GHB would have legitimate medical value, perhaps as a treatment for disorders such as narcolepsy. It was also marketed to the health and fitness crowd, as an energy booster, muscle builder, and fat burner. All that came to an abrupt end when the FDA, concerned about the frequency of overdose, reclassified GHB as a Schedule 1 controlled substance.

As the article suggests, GHB comes mostly in liquid form, through spray or drops. There’s no quality control so the potency can vary drastically between samples. It’s easy to take too much. When that happens, a coma may result. After waking, it’s common to have suffered memory loss.

One study reports that some participants readily acknowledged more than 50 such coma incidents. The same study found evidence of negative effects on short and long term memory and IQ, along with increased stress & anxiety. More research is needed, of course, but that’s not a promising start.

Is GHB addictive? It depends on your definition of addiction. Tolerance does develop. There’s no indication of a classic physiological withdrawal syndrome, but users do report so-called “rebound” symptoms post-use, in the form of anxiety and panic, irritability, and disrupted sleep.

Of course, we now understand that alcohol-like somatic withdrawal symptoms– tremors, nausea, vomiting, et al– are a feature of many substance disorders, but they’re not a requirement. Cocaine and methamphetamine taught us that much.

I imagine that for GHB as for other substances of this type, there will be a vulnerable population who become seriously dependent, while other users don’t.

Right now, GHB abuse is largely (but not exclusively) an urban phenomenon. Will it stay that way, or expand to other areas? We’ll be watching.