Heroin is certainly an addictive substance, so why didn’t all the subjects continue using it? 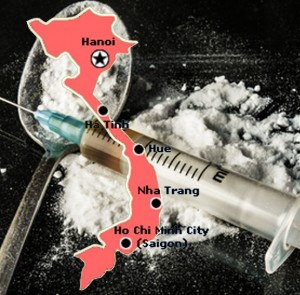 One of the oft-discussed mysteries of heroin: In spite of widespread use by US soldiers during the war in Vietnam, most did not continue use after returning Stateside. But others did, and some are still addicts today. Heroin is certainly an addictive substance, so why didn’t all the veterans continue using it?

That left scientists in search of an explanation. They looked for factors that might contribute to different outcomes. That included both risk factors and protective factors.

A 2003 study involved analysis of structured interviews with 374 returning veterans who acknowledged having used heroin in ‘Nam. The interviews themselves had taken place back in  1973, right around the time US involvement in Vietnam came to an end. The analysis came some thirty years later.

Drug use in the stress of a combat zone is never a surprise to experts. That was particularly true for Vietnam, given Southeast Asia’s reputation as a center of the world heroin trade. It would have been more surprising had drug use not increased.

One important consideration: Most of the study subjects said they had not injected heroin. They’d snorted or smoked it.  That’s of interest because injection is often a sign of escalating dependence. The usual pattern among addicts is to progress to intravenous use as increased tolerance and withdrawal render other forms of ingestion inadequate.

Soldiers who injected heroin while overseas were more likely to inject it after their return to the US.

It was also an era of widespread conscription– the draft. That translates to less selectivity in new recruits. Recruits arrived with histories of recent drug use or conduct problems that would no doubt have eliminated them from today’s volunteer military. Antisocial personality traits in particular are associated with increased risk for all types of substance abuse.

Looked at this way, the study findings seem to suggest that soldiers who were already at risk for substance problems– meaning those who were using drugs or experiencing certain behavior problems– found Vietnam to be fertile ground for escalating drug use and dependence. That dependence was likely to continue when they returned home. While others, without that vulnerability, were more likely to leave heroin behind.

Those who are interested can check out the study here.

Hey Scott, apologies for my slow response. I would argue that the way heroin metabolizes is why it causes such early withdrawal/relapse/dependence in users. Opiates (as far as I have found) are the only drug that causes the brain to stop creating its own natural pain killer. Cocaine, meth, marijuana, LSD etc., don’t have that physical pain attached to them when the drug is absent in the body. I’m sure none of this is news to you but I’m just thinking- that because of this trait in opiates, there is a quicker and stronger relapse/dependency trait involved. If a person has a high ACE score, they would naturally have less ability to produce a normal level of endorphin/serotonin- causing higher susceptibility to heroin.

Hi Dustin — just based on this one study, there do seem to be clear factors that predict continued use (and escalating addiction, no doubt) in some returning vets as opposed to others. IV drug use as opposed to snorting or smoking, for instance, along with history of previous use, antisocial traits, etc. That would support the idea that different people have different vulnerabilities, and I’m not sure they even looked at family history. However, since opiate/opioid users develop physical dependence quite early in their use (often just a few weeks), that would suggest a strong physiological adaptation process from the outset. And why would heroin addicts as a rule have higher relapse rates than those addicted to other substances, unless there was something different about heroin the substance? Those’d be questions I’d like to see researcher further.

I have heard the ace studies referenced in this topic by Stefan Molyneux. Dr. Gabor Marte has also worked with it. This heroin study is what led researchers to the conclusion that no drug is inherently addictive. (I believe) Very interesting. I’m a recovering heroin addict myself so it fascinates me. Thanks for your response. 🙂

I’m sure ACE like longer-term childhood maltreatment, neglect, etc. would have some impact on vulnerability to substance problems among a host of other disorders, Dustin, but I haven’t seen any research on that subject in particular. You might look at the ACE study findings to check.

I have read a lot of studies on this issue. Have you found any that stated the soldiers adverse childhood experiences had been shown to cause huge fluctuations in their addictions? Thanks for this post. Always interesting to read.