…despite the rapid growth in new cases, the number still doesn’t equal alcohol. 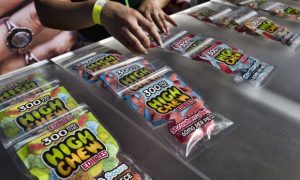 You may have read about the marked increase in ER visits in states such as Colorado where legal cannabis use is widespread. That’s not surprising given that the movement towards legalization occurred largely in the absence of good information– we relied on anecdotes and faith. As for the rest, we wait for the science while learning as we go.

Edibles have been around forever, but for decades users didn’t stray far beyond homemade brownies.  Meanwhile the supplements industry has grown exponentially, and edibles are considered part of that. There’s a bewildering array of forms in the marketplace: from cookies to candy to condiments and beyond, to go with every meal and your late night snack, too.

It’s easy for a casual user to underestimate the effect of edibles because it arrives far more slowly, without the fanfare of a rush. Here’s how it works: Cannabis taken by mouth passes through the stomach and then through the liver, where it’s metabolized. In the process the delta-9 THC is transformed so as to pass more quickly through the blood-brain barrier.  And it’s stored in the body’s fat cells, where it can continue to be released with accompanying effects over a much longer period of activity.

Where smoked or vaped cannabis “hits” in five minutes or so, it might take the user and hour or two to get the impact from an edible. And with edibles, the mind-altering effects may last 8 hours or even longer.

To a less experienced user, it can feel a bit like an acid trip. Even an experienced user could find the tolerance they built up from smoking doesn’t necessarily prevent problems when they switch over to edibles. When people show up in the ER, it’s evidence that the effects can be scary.

The article takes pains to observe that despite the rapid growth in new cases, the number still doesn’t equal alcohol. That could change with time, as edibles are more heavily marketed to consumers by companies eager to increase sales.

To me, this bolsters the argument for more regulation and limits on edibles, especially in terms of THC content. I’m okay with that. It’s just part of cleaning up our own mess, and protecting unwary users from some of the more obvious consequences of legal drug use.