Both Chronic, But Different: Addiction and Diabetes

We haven’t corrected any identified physical deficiency. We’ve simply substituted a medical opioid for an illicit one. 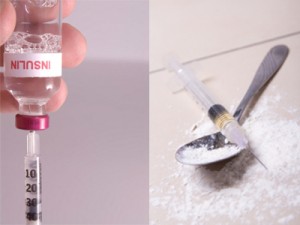 Let me just say that I view addiction as a disease process, chronic, often progressive, and potentially fatal. It’s the only view that ever made much sense to me in terms of the patients we treat. Purely psychological and social explanations fell short in ways where a disease model did not.

But just because addiction and diabetes are both chronic diseases, that doesn’t mean there aren’t important differences between them, and in the way they should be treated.

For instance: When we give insulin to a diabetic, we’re correcting a clearly identified malfunction in physiology. We can point to it, measure it, explain it. We use insulin where other approaches are less likely to be effective– with Type 1 diabetes, for instance. But other medications work as well in other patients. I know; I’m on some of them, with good results.

A diabetic who fails to take the prescribed medication almost invariably experiences the negative consequences of the disease. Symptoms grow worse in very definite ways. When the diabetic goes back on the medication, those symptoms recede– albeit it’s likely some real damage has been done during the period of noncompliance.

It’s a key difference from the experience of substance addiction. When an alcoholic or heroin addict stops using substances, he or she experiences withdrawal and then begins a period of rapid improvement. Translation: the patient begins to feel better. Much better. The improvement is unmistakable.

Where that doesn’t happen– in the minority of cases where symptoms such as depression or anxiety or physical pain seem to get worse in the absence of substances– it’s ordinarily because of the presence of another major disorder that can be diagnosed and treated.

But the symptoms of addiction go away with abstinence and time.

Perhaps not overnight, the way addicts would prefer — the damage of years of abuse may take longer to heal– but it’s dramatic nonetheless.

When we prescribe a maintenance schedule of methadone or buprenorphine, we can’t actually point to a physiological basis for our decision. We prescribe the opioid medication to achieve certain important clinical goals– reduced street drug use, for instance, or reduced risk of infectious disease and drug-related criminal activity. That’s of great value but it’s not equivalent to insulin. We haven’t corrected any identified physical deficiency. We’ve simply substituted a medical opioid for an illicit one.

We put addicts on maintenance doses of opioids because we lack a better approach for maintaining them in an outpatient setting. Doesn’t mean they wouldn’t ultimately be better off abstaining from opioids altogether– just that we haven’t yet devised a better way to help them.