If we ever were able to “seal” the borders, what would prevent some entrepreneur from setting up his own domestic operation? 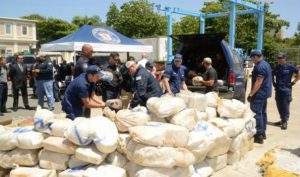 This past year has focused considerable attention on the issue of protecting our nation’s borders. I’ve been thinking about our longstanding efforts to stem drug traffic. There may be some valuable lessons for us there.

Remember the cocaine epidemic in the 70’s and 80’s? Most of the early traffic was by air. Smugglers had been bringing in marijuana for years, flying small planes in the dead of night, making use of remote landing strips in Florida and neighboring states. They were on the ground just long enough to unload and then take off again. Then somebody realized that an emerging market for cocaine could mean far higher profits for traffickers– really just a matter of switching out the cargo. The routes were already in place. That’s a big reason the epidemic was initially felt in a dozen or so southern states. Those then became the base for expansion into other regions of the US.

It took quite a while for law enforcement to fully appreciate this change. Mark Gold told a wonderful story about his early experience setting up the 800 Cocaine hotline. He asked the government for official estimates as to how many people he could expect to call the line in its first year of operation. I believe they pegged the calls at a thousand. He appeared on morning talk shows to announce that they were  open and ready to assist callers seeking help. By the time he got home to New Jersey, the phones were clogged, and stayed that way for many months.

This is not unheard of with fast-growing illicit drug traffic. By the time the authorities recognize the scope of the problem, it’s already too big to manage. There’s an established demand for a particular drug, so the incentives are firmly on the side of the traffickers. The rest of us struggle to make up ground. I remember one DEA agent telling me he felt as if they were closing the barn door a month after the horses had escaped.

I think in retrospect our error was to focus way too much on the supply side, and not enough on that crucial element of demand. There was no corresponding interest in or funding for treatment. In fact, many politicians advocated lengthy incarceration for users. Not much faith in recovery.

I wondered at the time why closing the borders, assuming that were even possible, wouldn’t just motivate a dramatic uptick in domestically produced drugs. Maybe not cocaine, but why not amphetamines? They’re not difficult to make; ingredients were available. If we ever were able to “seal” the borders, what would prevent some entrepreneur from setting up his own domestic operation?

Now we know the answer: Nothing. They even turned it into a hit TV show.

Nowadays, I find myself wondering the same about synthetic opioids. Currently, they’re brought into the US from Southeast Asia and China, but what would prevent outlaw chemists from making them here?

Same answer, so far as I can see: Nothing.

It’s still about incentives. Those are already in place. The problem now is established, persistent demand. And that means we should invest in treatment, and the funds to make it work.

We don’t want to be like that DEA agent, standing at the barn door, peering in at empty stalls.