Naloxone is there to prevent someone from injecting Suboxone to get high. 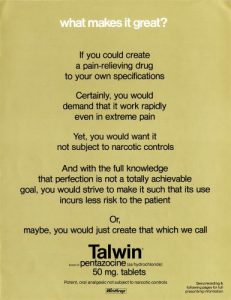 The question: Suppose someone who was on Suboxone maintenance decided to go ahead and inject heroin. Would the naloxone in Suboxone protect him/her from heroin OD?

Answer: No, it wouldn’t.

Naloxone is added to buprenorphine to prevent injection abuse of the Suboxone. That’s its only purpose. It would have no antagonist value if the user decided to inject a different opiate.

I first encountered this practice with Talwin (pentazocine), another opioid that enjoyed an Oxy-like spurt of popularity several decades back. It makes for an interesting (and instructional) tale, worth a read.

Talwin overdose was common. The manufacturer was pressured to take preventive measures. Naloxone turned out to be the answer. Most people who OD’ed on Talwin were injecting it. With the addition of naloxone, a user could crush, heat, and shoot Talwin without getting the desired euphoria. In fact, s/he might be thrown into acute withdrawal– certainly not the desired outcome. Yet naloxone didn’t interfere with the drug’s effectiveness when taken by mouth.

Like Talwin, buprenorphine is an opioid with some potential for abuse, and naloxone prevents someone from getting high from injection. But somewhere along the line, users became confused and interpreted its presence as protection against all opiate OD. Not so.

I have heard advocates claim an advantage for opioid maintenance in terms of reduced risk of overdose, but that’s just because of the elevated tolerance that goes along with methadone or buprenorphine maintenance. It’s true that it would require a much higher heroin dose to overcome the blocking effect of an 80-120mg daily methadone regimen. But with the popularity of fentanyl and other synthetics, that may not be enough.

Haven’t seen much research to confirm this. We’ll have to wait and see.

During an epidemic, all sorts of approaches are tried, in a sort of fever to find something, anything, that helps.