It can be flagrant or subtle, but damage it will be. Sadly, the drinker is usually the last one to become aware of it. In fact, many never do. 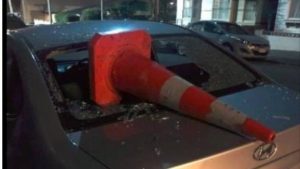 We’re all familiar with the concept of secondhand smoking. It’s a form of direct pollution of the environment, comparable to industrial smog or asbestos or lead contamination. Is there a comparable phenomenon related to alcohol consumption?

The study described here suggests there is.

Adverse effects that the researchers linked to someone else’s drinking included:

Easy to connect those with alcohol abuse. If you’ve ever visited a popular drinking establishment on a weekend, you’ve probably witnessed harassment, sexual and otherwise, by intoxicated patrons.

Same for property crimes, such as vandalism. Think about what often happens after a sports team wins a championship. Drunken brawls, overturned vehicles, busted-out shop windows, fires set in trash bins. It’s behavior we don’t ordinarily see with pot or LSD or heroin. An alcohol thing.

A few years back a local teen ran his car right up onto a neighbor’s lawn, caved in the wall of the corner bedroom. Fortunately the occupants were out of town. The kid backed up and hurried off, probably hoping to avoid discovery. He failed to realize he was leaving a trail of engine oil all the way home.

This kind of thing is funny until suddenly, it’s not. Someone gets hurt.

Attend a family support group or self-help fellowship to learn about the damage that alcoholism can do to those around the drinker. It can be flagrant or subtle, but it’s damage nonetheless. Sadly, the drinker is often the last one to become aware of it. In fact, many never do. They just keep drinking, and others continue to suffer.

One frequent suggestion is to add a brief screening for “unhealthy drinking” to the protocol for routine physical and medical exams. Presumably that would motivate practitioners to address the problem at an earlier stage, when intervention and treatment might be more effective. Rather than waiting for a crisis. Not a bad idea, and I believe it’s already standard in many areas.

This study highlighted a rising problem in the 18-25 age group. That’s reflected in the appearance of “sober influencers” on social media platforms. I’m not sure how “sober” some of these influencers are — some appear to still be drinking — but the idea itself has merit. If the target population spends much of their time online, we should take advantage of it.