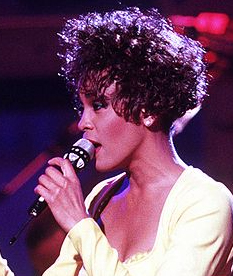 It’s early Sunday morning, and the Web is full of mad speculation about the cause of Whitney Houston’s death. The overriding belief seems to be that it was drug-related. I haven’t a clue, of course. Be a while before we know for certain. Still, it makes me think of another Sunday, and a different public figure.

The morning the news broke of the death of basketball star Len Bias, I was doing an interview at a radio station in the DC suburbs. The station’s audience was primarily college age African American kids — Len’s demographic. The host pulled me aside. “Word on the street is he OD’ed on coke,” he host confided. “What else could it be?” I mentioned Marfan’s Syndrome, a heart condition that sometimes afflicted tall, long-limbed athletes. But of course, the street was correct. Maybe they will be this time, too.

Over the years I’ve worked with a number of programs that treated the rich and famous along with the rest of us, and I still don’t know quite what to make of them. Doesn’t seem to matter much whether fame is rooted in music, film, TV, sports, politics — there’s this sense of unreality to all of it. That makes for additional challenges in treatment. In some cases, celeb patients have reminded me of the addict who gets a windfall from his rich aunt, and you just know that somehow, despite efforts to prevent it, he’s going to blow the whole thing and possibly end his life in the process.

And talk about enabling! I’ve had the feeling there’s a whole industry out there, built around protecting the rich and famous from the consequences of their behavior. No wonder they seem unmotivated for change.

I joked with the director of a Southern California program that given the prevalence of celebs in his patient census, he probably needed accreditation from People magazine as well as the Joint Commission. He confessed that his staff advised every celeb patient to avoid going public for a year. “You see how much attention they pay to us,” he complained.

It’s a sad business. I guess the mystery isn’t why so many celebs fall victim to addiction — it’s how so many manage to recover. More power to them. I’m just sorry to lose one of the great talents of her generation.

And glad I spend most of my time with ordinary folks.